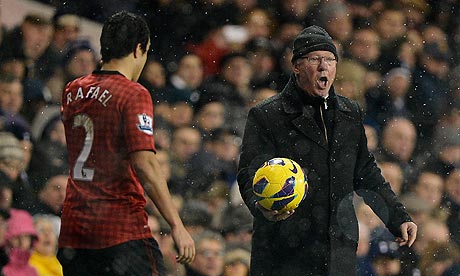 It appears that Sir Alex’s temper may have gotten him into trouble yet again. His recent outburst after United’s 1-1 draw against Tottenham on Sunday has brought about an inquiry from the Football Association.

Sir Alex called linesman Simon Beck’s performance on Sunday as “shocking” after Beck failed to award a penalty to United when it was clear that Wayne Rooney was challenged in the penalty area by Steven Caulker.

Ferguson went on to claim that Beck’s non-call was typical as the official has a history against United. He missed an offside Didier Drogba goal back in 2010 and Ferguson claimed that “There was no way were going to get a decision from (Beck).”

The FA has confirmed that they have contacted Sir Alex regarding his comments and the Red Devil’s manager must now respond to them by 6pm on Thursday. If the FA decide that Ferguson was questioning the integrity of Beck, he could face a touchline ban and maybe even a fine.

United defender Rio Ferdinand sided with his coach and said that a penalty kick should have been awarded. He told MUTV “It was 100 percent penalty. I cannot believe he didn’t give it. The linesman (Beck) didn’t really help us on the near touchline at all in the second half especially.”

Ferdinand’s comments were less accusatory than Sir Alex’s. His tone is not surprising considering Ferdinand’s commitment to charity and peaceful community relations. His Rio Ferdinand Foundation recently joined a partnership to combat gang violence, and Ferdinand was also part of Man Utd’s recent charity poker game where they raised money for a northern Irish hospice.

On the other hand, Sir Alex has a long disciplinary history with the FA. He received a £30,000 fine and a five-match touchline ban in March 2011 after questioning referee Martin Atkinson’s integrity after a match against Chelsea. He also had confrontations with officials during United’s game against Newcastle earlier this season, but he managed to avoid punishment for that incident.