The ‘vanishing spray’ is used by the referee to mark 10 yards between the ball and the wall at free-kicks. This line is a clear indicator of where the opposition teams should be standing before the free-kick is taken and was introduced in an effort to stop the attacking team gaining advantage by moving closer to the goal and the defensive side from encroaching towards the ball.

Once used, the spray disappears within 45 seconds without affecting the pitch and is seen as a way of tackling long, time-consuming breaks in play in which officials have to monitor encroachment.

The spray was introduced in South America and then trialed at last summer’s Copa America.

The IFAB – International Football Association Board made up of FIFA and the English, Scottish, Welsh and Northern Irish federations – is set to meet next month and introduction of the spray (or trials in Europe / other international events) is expected to be on the agenda.

Other key discussion points include allowing a fourth substitution when games run into extra time, additional assistant referees and goal-line technology, although in classic FIFA fashion you shouldn’t expect any technology to be part of football’s decision making in the near future (unless they use Sky’s cameras, that is).

Would you like to see the vanishing spray used in more football matches to prevent unnecessary delays in setting up free kicks? Or do you think that there are other ways that the ‘Authorities’ can penalise time wasting in the game and – given that they argue for the flow of the game when opposing technology – penalise actions by players that deliberately interrupt the flow of the game? 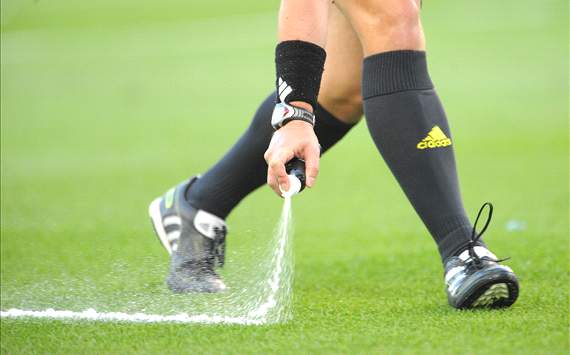 Personally I think that the vanishing spray is a great little idea, but there are much bigger issues that need to be fixed in football, top of the list being video replays.