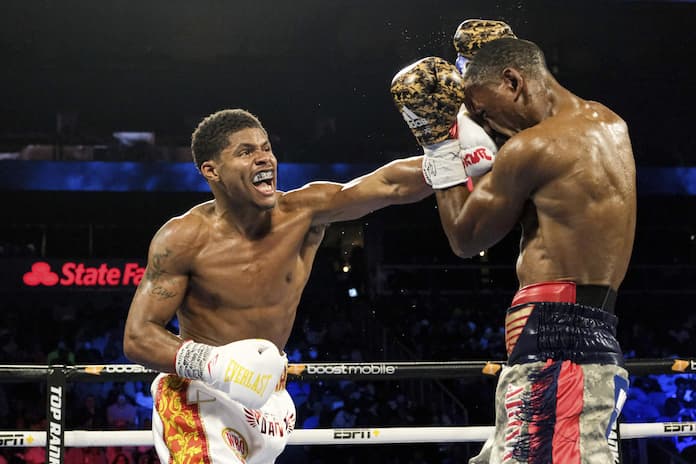 SHAKUR STEVENSON defends his WBC and WBO world super-featherweight titles this Friday night against the tough, game Robson Conceição. Stevenson is one of the hottest prospects in the world and the best in the 130-pound division, so can he further emphasise this and continue to reign supreme?

On paper, this is a fight that could go either way. Stevenson is one of the biggest stars in boxing already at the age of just 25, meanwhile Conceição has just the one defeat on his record to Oscar Valdez. This fight is certainly a compelling one!

If you fancy a wager on this fight in the super-featherweight division, read on and check out our betting picks and predictions, as well as making use of the various free bets and betting offers on this page.

The superstar that is Shakur Stevenson returns to the ring in an attempt to defend his WBC and WBO world super-featherweight titles.

The 25-year-old is arguably one of the best fighters on the planet in any weight division, and will be looking to further emphasise how he is the best fighter at 130-pounds by a long stretch.

In his way is the first every Brazilian Olympic Gold Medallist, Robson Conceição. Conceição gets his second shot at world honours, after challenging Oscar Valdez last year for his WBC crown, before Stevenson himself defeated Valdez emphatically.

At just the tender age of 25, Shakur Stevenson is already a two-weight world champion, having won the WBO world title down at featherweight. There have been rumours of Stevenson stepping up to 135-pounds, and mixing it with the lightweight stars such as Gervonta Davis, Teofimo Lopez, Devin Haney and Ryan Garcia.

Stevenson is arguably better than them all, and a move up to lightweight could be on the horizon, provided the American amateur star successfully defends his two world title belts here on Friday night in his hometown of Newark, New Jersey.

Stevenson will be keen to get a 19th win as a professional this weekend, against a man who has only tasted defeat once and will be full of belief on his travels to the United States. So without further ado, here are our Shakur Stevenson vs Robson Conceição betting picks and best bets.

Our first betting tip is that Shakur Stevenson will comprehensively beat Robson Conceição on points at the Prudential Center in front of his hometown fans and put on a show for his Newark faithful.

Looking at Stevenson’s resumé, it is impossible to pick out any flaws. The Newark native has barely lost a round in the professional boxing ring, never mind nearly losing a fight.

The undefeated young-gun has already claim world titles at both featherweight and super-featherweight, becoming unified champion last time out after defeating Oscar Valdez by unanimous decision in a fight that was meant to be close, but was totally one sided in favour of Stevenson who bamboozled the Mexican.

We think Friday’s fight could end up being something similar with Stevenson running away with it, picking up each round and boxing his way to a comprehensive victory on the three judges’ scorecards after 36 minutes of impeccable boxing.

Robson Conceição is as tough as they come and will give it a good go, but fighting against the number one in the division in his hometown is a mammoth task. We don’t see the Brazilian getting stopped, as he has never been knocked out before and carries enough power himself to make Stevenson cautious.

Our Best Bet for this undisputed super-middleweight showdown from Newark this weekend is that Stevenson will defeat Conceição via unanimous decision and score a knockdown during the fight. This is priced sensationally with Bovada, who are offering a mouth-watering +220 for this outcome.

As we have previously alluded to, this fight looks like it could have a Stevenson wide points decision written all over it. However, we see there potentially being some good value in backing the Newark man to win, but scoring a knockdown on the way.

Although we can’t see the former American amateur boxing superstar knocking the tough Brazilian out, scoring a knockdown seems likely, with the spitefulness and accuracy he has shown in recent fights.

Another factor is the fact the fight is in Stevenson’s hometown, so he will be keen to put on a show and an impeccable display in front of his people. We can’t see the KO/TKO coming for the 25-year-old, but a knockdown is certainly possible against the Rio 2016 Olympic Gold Medallist.

Shakur Stevenson vs Robson Conceição Best Bet: Stevenson to win by Unanimous Decision and score a Knockdown @ +220 with Bovada

Haven’t claimed the Stevenson vs Conceição betting offer yet? Don’t worry, take a look at the best betting sites and claim the best bookmaker free bets. Be sure to also check out the best offshore betting sites.

When Is Shakur Stevenson vs Robson Conceição?

TV channel: If you have ESPN on your TV, you will be able to watch this compelling super-featherweight undisputed clash live from the Prudential Center on ESPN, provided you are a subscriber to the channel and have access to a television.

Live stream: ESPN subscribers can also catch the action online and via the ESPN app, provided you have the app downloaded on your device, are a subscriber to the channel and have access to a mobile, tablet, laptop or any other device capable of streaming the fight.