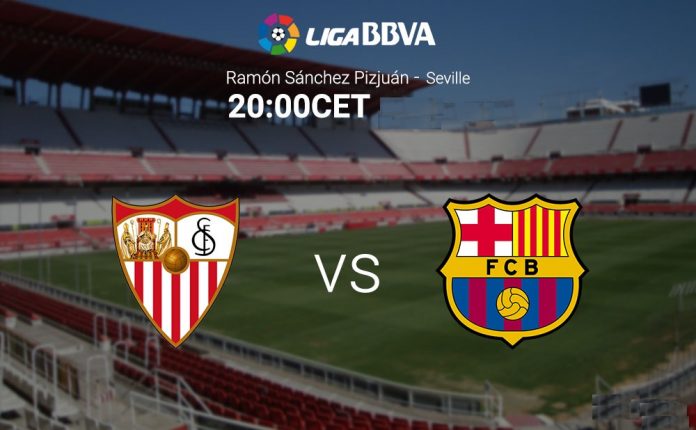 Sevilla host Barcelona in La Liga this weekend, and the home side will be looking to continue their good run of form with an upset win over the champions.

Sevilla have started the season really well and are just one point behind their opponents Barcelona, who are second in the league table. Furthermore, they have been very good at home and will look to fix their poor record against Barcelona with a win in front of their own fans.

The home side will have seen Barcelona’s weaknesses during their defeat against City in the Champions League and will be looking to exploit them.

However, the absence of Samir Nasri will be a major blow for the home side. The Manchester City loanee was forced off during Sevilla’s 1-1 draw with Sporting Gijon due to a hamstring injury. Benoit Temoulinas and Michael Krohn-Dehli are Jorge Sampaoli‘s only other injury absentees.

Barcelona will be determined to bounce back from their 3-1 loss against Manchester City during the midweek.

The Catalan giants will look to close the gap with league leaders Real Madrid and cannot afford to drop points here. Furthermore, they have a very good record against Sevilla in the league and will look to extend that with another win.

Sevilla are no pushovers and the away side will need to be at their best here. They have been quite inconsistent at times and cannot take their opponents lightly.

Pique and Iniesta are the only injury worries for Luis Enrique‘s side. Jordi Alba is a doubt and will be assessed closer to kick-off.

Sevilla have won 19 of their last 22 home matches in La Liga.

Barcelona have scored at least 2 goals in 11 of their last 13 matches against Sevilla in all competitions.

Barcelona have won 7 of their last 8 away matches in La Liga.

Barcelona have won 5 of their last 6 matches against Sevilla.

Barcelona are undefeated in 16 of their last 17 matches against Sevilla in all competitions.

Barcelona have kept a clean sheet in their last 3 matches against Sevilla in all competitions.

Barcelona have an impressive record against Sevilla and will be hungry for a win here. Get the Catalan giants to win at 8/13 with Ladbrokes.

Sevilla have been in imperious form at home. Get them to win or draw at 5/4.

Barcelona have scored a fair few against Sevilla and considering the current form of both sides, goals are likely in this one. Bet on the match to end with over 2.5 goals (2/5).

Both sides are in superb form right now, but Barcelona are head and shoulders above the home side in terms of sheer quality.

They will be desperate for a win after a poor performance against Manchester City this week. Furthermore, they will be confident of a win especially because of their outstanding record against Sevilla.