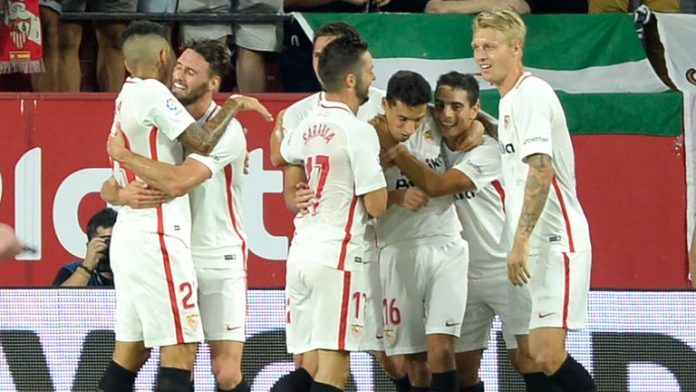 Sevilla host Krasnodar on December 13 needing a victory to progress to the knockout stage of the Europa League.

The La Liga side are second in Group J, three points behind the Russian Premier League team and level with Belgian outfit Standard Liege.

Krasnodar need a point to go through as group winners, but can lose and go through if Standard drop points at Akhisar.

Even if Standard win, Krasnodar would have to lose 4-0, or by a five-plus goal margin, to be eliminated.

Sevilla will progress if they win or at least match Standard’s result due to their head-to-head advantage.

However, with Akhisar having lost all five group matches, Sevilla are almost certain to need three points to make it through to the last 32 of the competition.

The latest Europa league odds have Sevilla as 2/5 favourites to win the group, but it would be foolish to underestimate the threat posed by Krasnodar.

They ran out 2-1 winners when the two sides met in Russia back in October, although they needed to recover from the setback of conceding Charles Kabore’s first-half own goal.

They were the better side after the break and deservedly equalised through Mauricio Pereyra in the 72nd minute. Tornike Okriashvili’s spectacular scissor kick late on sealed a deserved victory for the Russian club.

The five-time Europa League winners missed a golden opportunity to qualify for the next stage on matchday five, with Moussa Djenepo’s goal in the 62nd minute securing a 1-0 win for Standard.

A draw would have been enough to take Sevilla through, but they now face what could be a nervy night at the Ramon Sanchez Pizjuan Stadium.

However, their home form in this season’s competition has been impressive and they will fancy their chances of progressing.

They beat Standard 5-1 back in September and Akhisar 6-0 a month later and haven’t lost at home in this competition since a 2-0 defeat against Real Betis back in 2014. Sevilla have also been in good form on their own patch in La Liga, reeling off five wins in a row.

Krasnodar have won all three home games in the Europa League this term, but their away form has not been as good. They struggled to overcome Akhisar, recording a narrow 1-0 in Turkey, and were beaten 2-1 by Standard.

Sevilla have made things tougher than they needed to be in the group, but they are fancied to maintain their excellent home form and advance to the knockout stage.