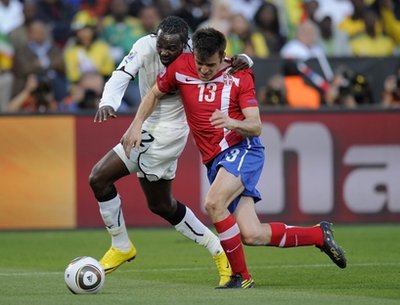 Ghana started out the 2010 World Cup Group Stage with a victory and in position to qualify for another knockout stage.

They were much more dangerous than Serbia in the match and had chances to win by several goals. The African side were without Michael Essien but it didn’t matter as they were able to have the better play in both halves.

Despite having the better and more frequent chances, it was scoreless heading into the final minutes of the match. Ghana would strike in the 84th minute as Asamoah Gyan converted a penaltty kick to give his side a 1-0 lead.

Ghana almost made it 2-0 in stoppage time as Gyan hit the post. Serbia’s chances of advancing to the next round are in a lot of trouble and they will need a result in their next match, which is against Germany.

Asamoah Gyan of Ghana converts a penalty kick in the 84th minute to give his team the lead and the win.