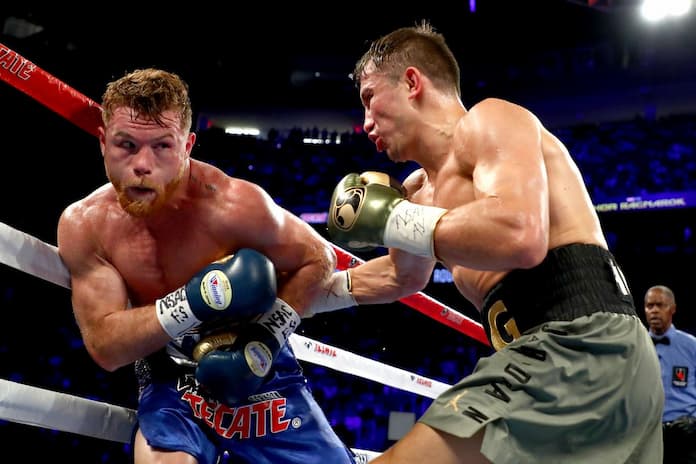 An era-defining trilogy fight takes centre stage this weekend and Saul ‘Canelo’ Alvarez and Gennadiy ‘GGG’ Golovkin meet for the third time. The first two fights were thoroughly entertaining, brutal wars, so the third could well be similar. This time up at 168-pounds, who will rule supreme and become the undisputed champion?

On paper, this is a fight that could go either way. It is a genuine 50/50. Both warriors have sensational wins on their respective resumés, and have endured 24 brutal rounds together before. The first was deemed a draw, the second was a majority decision in favour of the Mexican, so who will win the third to put an end to this historic boxing rivalry?

If you fancy a bet on this fight in the super-middleweight division, read on and check out our betting tips and predictions, as well as making use of the various free bets and betting offers on this page.

Four years after their rematch at this same arena, Gennadiy Golovkin and Saul ‘Canelo’ Alvarez are set to do battle for the third time this weekend.

The first two fights between the pair were quite simply magnificent. The first fight was deemed a draw, with the second going the way of the Mexican. If this trilogy is anything like the first 24 rounds Canelo and ‘GGG’ shared, boxing fans are in for one hell of a treat this Saturday night in Las Vegas.

Although the first fight was deemed a draw, the general consensus is that Golovkin most definitely won that night back in 2017 and defeated the pound-for-pound king. However, the three ringside judges didn’t see it that way, with the Kazakh being left frustrated and aggravated at the result.

The second fight was even closer, and it was a fight in which you could make a case for either man winning. Canelo was given the nod on the scorecards in a fight that was nip and tuck, ebb and flow and worthy of this trilogy four years later.

It is fair to say that the boxing community are favouring the unified super-middleweight champion to defend his belts here and potentially even knock out an aging Golovkin, but this pair of boxing superstars just seem to gel perfectly, so lets hope we get another 12 incredible rounds of action this weekend at the T-Mobile Arena in Canelo vs GGG 3.

This trilogy has everything and if it’s anything like the first two fights, boxing fans are in for a real treat this weekend. Without further ado, here are our Saul ‘Canelo’ Alvarez vs Gennadiy ‘GGG’ Golovkin 3 betting tips and best bets.

Our first betting tip is that Saul Alvarez will finally put an end to this era-defining trilogy and comprehensively beat Gennadiy Golovkin on points at the T-Mobile Arena.

As we have alluded too previously, the first fight was a close one, but one that Golovkin should have won. The second could have gone either way. So in theory, you could make a case for Golovkin being 2-0 up against Canelo, but instead he hasn’t won a single one.

Disappointingly for the Kazakh powerhouse, here at SportsLens we think this trilogy could have come a little too late for him and that Canelo will get back to winning ways and show the world just how good he is this Saturday night.

The fact the fight is up in a weight division that Golovkin has never fought in, eight-pounds up, against a man who has demolished everyone in the 168-pound division in the past three or four years, makes us believe that Canelo is holding all of the aces here and ‘GGG’ is seriously up against it.

Another telling factor is the age of both men. Canelo is arguably in his prime right now at 32-years-old, whereas Golovkin hasn’t looked as unbeatable and punch perfect in recent fights now that he has hit the 40-year-old mark.

Boxing is a young man’s game, and there gets a point that no matter how good you are, father time plays his part. We think that could be the case this weekend. Golovkin will try his best and go out on his shield, but that ultimately the younger, fresher, natural super-middleweight will break Golovkin down and beat him more convincingly on points this time.

Our Best Bet for this undisputed super-middleweight showdown from Vegas this weekend is that ‘Canelo’ will defeat ‘GGG’ via unanimous decision and score a knockdown during the fight. This is priced sensationally with Bovada, who are offering a mouth-watering +260 for this outcome.

The reasoning behind this betting tip is that Canelo has fought numerous times up at super-middleweight, meanwhile Golovkin hasn’t. Yes, ‘GGG’ is the bigger man in stature, but Canelo has been there, done it and won every belt there is to win in the division.

Golovkin has a granite chin, and has taken some enormous shots from Canelo in their previous 24 rounds that they’ve shared in the ring together. This makes us think that it is highly unlikely that he gets knocked out by the Mexican, however, may suffer a knockdown at some stage during the fight.

Golovkin has never been on the deck in his boxing career, amateur or professional, but he is 40-years-old now and up against one of the biggest punchers and devastating finishers in all of boxing right now.

Canelo won’t go searching for the big knockout and will bide his time if needs be, but it wouldn’t come as a huge shock to anyone if he was to send Golovkin tumbling to the canvas at some stage during the fight.

Ultimately we see a Canelo win as inevitable, but that he will more than likely get the job done on the judges’ scorecards rather than by KO/TKO.

Saul ‘Canelo’ Alvarez vs Gennadiy Golovkin 3 Best Bet: Canelo to win by Unanimous Decision and score a Knockdown @ +260 with Bovada

When Is Saul Alvarez vs Gennadiy Golovkin 3?

TV channel: If you have DAZN on your TV, you will be able to watch this compelling super-middleweight undisputed clash live from the T-Mobile Arena on DAZN PPV, provided you are a subscriber to the channel and have paid the pay-per-view.

Live stream: DAZN subscribers can also catch the action online and via the DAZN app, provided you have the app downloaded on your device, are a subscriber to the channel and have paid for the pay-per-view.