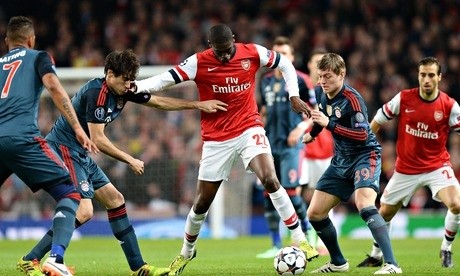 Arsenal manager Arsene Wenger has declared that his young French striker, Yaya Sanogo, could be the new Anelka.  It’s high praise for the young player who was surprisingly thrown into the maelstrom of a game against Bayern Munich last week, but if Wenger thinks that highly of him, it probably explains why he was prepared to play him against the European champions.

Although Olivier Giroud doubtless retains the number one striker role for the Gunners, having a player that he can throw in to support the French striker, and replace him when he requires a rest, is suspended or injured will be a great boon for Wenger. Before the arrival of Sanogo, the only real option to replace Giroud on a  ‘like for like’  basis was the enigmatic Nilklas Bendtner. Playing Theo Walcott as striker offered a different dimension, but injury has of course taken that option away.

Sanogo still looks very raw and will doubtless require a period of development but should he live up to his manager’s expectations, it could save the club the cost of buying another striker. The summer and January windows were replete with rumours of strikers linked with audacious bids from Arsenal. It may be however, that the answer already lies within the squad with the ‘new Anelka.’