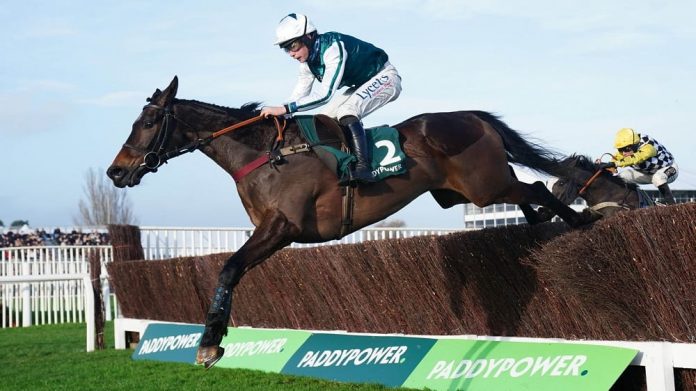 There are Sandown tips aplenty from the Scilly Isles Novices Chase card at the Esher venue on Saturday, 5 February. See what SportsLens experts fancy in all the feature races taking place at this Grade 1 track. Read our Sandown tips and Saturday selections for this meeting in full below.

It’s more than likely that some of the Cheltenham odds for the Festival as a result of the races run at Sandown. Alongside the Scilly Isles, there is the Listed Contenders Hurdle for Champion Hurdle hopefuls and the Grade 3 Heroes Handicap Hurdle. The old Gainsborough Chase, now run as the Virgin Bet Masters Handicap Chase, is also on the card.

Not the most original selection, but L’Homme Presse has been hugely progressive for Venetia Williams this season. He’s the first of our Sandown tips for a successful step up into Grade 1 company in the feature Scilly Isles Novices Chase. One of the few stable inmates that acts on sounder surfaces, this seven-year-old Diamond Boy gelding has won all three starts of his starts this season, earning quotes from Cheltenham betting sites in the process.

L’Homme Presse scored by six lengths on his chase debut at Exeter, beating another of our Sandown tips in Gunsight Ridge. He then bolted up when horse racing betting sites made him favourite for an Ascot graduation chase in December. L’Homme Presse then completed his hat-trick in the Grade 2 Dipper at Cheltenham on New Year’s Day.

A typical French import to the yard, he left dual Listed winner The Glancing Queen behind him up the famous hill. L’Homme Presse was a ready 10-length winner. Fantastikas, back in third, has come out and won since when our experts tipped him during the Winter Million at Lingfield, so that reads well. Odds of 5/6 with race sponsors Virgin Bet still have juice in them for this in-form horse.

Back L’Homme Presse at Sandown with Virgin Bet

As noted above, the horse who chased home L’Homme Presse at Exeter, Gunsight Ridge, also remains open to improvement. Trained by Olly Murphy for Diana Whateley, this seven-year-old Midnight Legend gelding has been going the right way over fences. After coming third on his bow in this horse racing sphere at Aintree and then finishing runner-up, Gunsight Ridge scored over course and distance last month.

The going at Sandown will be different here but he has won on good ground before. Gunsight Ridge also has a piece of eye-catching back form in Irish Points. Pats Fancy, who chased him home at Loughrea, won twice in December beating Imperial Alcazar on the second occasion. The runner-up went on to be among the winners in the latest round of Cheltenham results from Festival Trials Day.

It’s strong collateral form and makes a revised mark of 135 for Gunsight Ridge look exploitable. Although 4lb worse off at the weights with re-opposing runner-up Bun Doran, that rival is now an 11-year-old and hasn’t seen his races out this season. Gunsight Ridge therefore looks worth a wager at 3/1 with Virgin Bet alongside his Exeter conqueror here.

Bet on Gunsight Ridge at Sandown with Virgin Bet

In a typically open renewal of the Heroes Handicap Hurdle over almost 3m, our Sandown tips say Orbys Legend looks each way value. Some of the best betting sites pay five and even six places on this race. Philip Hobbs’ charge is a course winner who has since landed two of three starts this season.

Orbys Legend scored in this grade on reappearance when landing the Silver Trophy at Chepstow. A mistake two out in the Betfair Stayers Handicap Hurdle at Haydock put paid to any chance on his next outing. However, this six-year-old Milan gelding resumed winning ways last time out in a Pertemps Qualifier at Wincanton. He could end up among Cheltenham tips for the Final if he goes well here.

Given his overall progressive profile, a mark of 142 may not be beyond Orbys Legend. Many others will fancy their chances here but Hobbs has three previous winners of this since 2005. Only Paul Nicholls has a better recent record in the race than that. Orbys Legend is an 8/1 chance and solid each way bet with the Chepstow form working out reasonably well.

Back Orbys Legend each way at Sandown with Virgin Bet