Well, there isn’t much to say about the Earthquakes. There used to be a San Jose Earthquakes club, but they moved to Houston in 2005. All the players and most of the coaching staff went to the Houston Dynamo, and the community of San Jose mourned the loss of their club. The Bay Area will have their team back beginning this season, but with all new players and an all-new hope for the future.

The entire squad is new.

Again, nothing against field players, but keeper Joe Cannon is the most experienced player on this new San Jose squad with nine seasons in the MLS. He was on the last Earthquakes team to win the MLS Cup, in 2005 before disbanding.

Defender Ramiro Corrales also won the MLS Cup with San Jose, in 2001 and 2003. He also has a lot of experience (including a stint at SK Brann in Norway). If he and Cannon can stay healthy, they should be the team leaders. 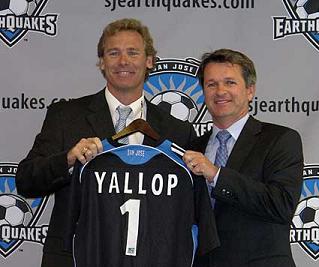 The biggest factor for San Jose will be cohesion. It will not be an easy season, being their first back in the league. Head coach Frank Yallop is back with the franchise he made successful, bringing their first Cup win in his first season with them (2001). He did not move with the team to Houston. If he can bring the team together like he did the first time, in as short of a time period, the team will do at least better than some expansion teams have.