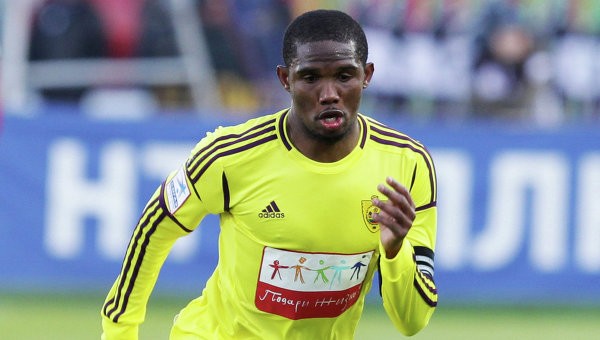 A host of clubs across Europe are on red alert after hearing the news Anzhi striker Samuel Eto’o has been placed on the transfer list this summer. His asking price is said to be around £5M.

The 32-year old is the highest earner at the Russian Premier League side – who have slashed their budget in half, and are subsequently forced to put up every player for sale.

Eto’o a Cameroon international, joined Anzhi in 2011 – where he went on to make 71 appearances, scoring 36 goals.

Once regarded among the top-10 best strikers in the world, Eto’o has still proven he can be prolific at 32 years of age. His agent, Caludio Vigorelli, has been talking up a potential move to Napoli, but no offer has been made by the Serie A side.

Premier League sides Newcastle United and Chelsea have both been linked as potential suitors, but there is no word of either side making an official approach.

His contract with Anzhi expires at the end of next season, but his wages in Russia could prove to be the ultimate stumbling block. Reportedly on around £300K a week, there aren’t many clubs willing to match his demands for a player of his age, which could see him remain in Russia for one more term.

Eto’o is said to have been a fan of the Italian lifestyle from his time with Serie A giants Inter Milan. Both him and his agent are hoping Napoli make an approach, but it appears unlikely based on their action in the transfer market already this summer.

Newcastle and Chelsea are both in the market for a striker, but there is no suggestion they would ever entertain the Cameroon international’s £300K-a-week demands.