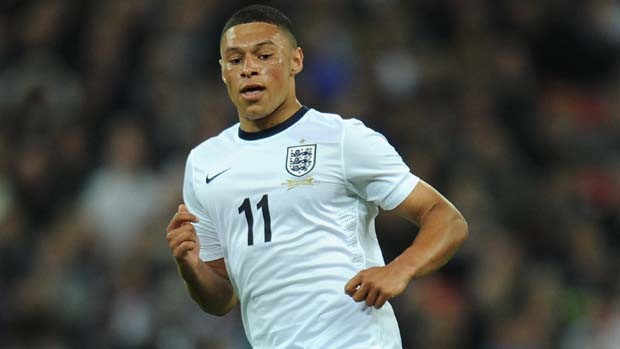 Arsenal midfielder Alex Oxlade-Chamberlain says England coach Roy Hodgson will take a decision if he will take part in 2015 UEFA European Under-21 Championship.

The tournament occurs once in two years and the upcoming event will be hosted in Czech Republic, starting from 17 June to 30 June 2015. The Young Lions have already qualified for the European Under-21 Championship.

Oxlade-Chamberlain is one of the few players who has already played for the senior team and as well as the Under-21 side. He was the part of England squad for the 2014 FIFA World Cup in Brazil, along with Manchester United left-back Luke Shaw.

The former Southampton defender, 19, is also a part of both the Three Lions and the Young Lions’ squad.

“Yes, you’d never turn your nose up at something like that, but there’s a lot that goes into that because the National team have two games around the same time as the tournament. So it’s up to Roy Hodgson to decide if he wants,” Oxlade-Chamberlain explained.

“There’s a lot of players in the England squad at the moment that could drop back down and play for the U21’s so it’s up to the manager to decide.”

“I don’t know the dates.  When that time comes around I’ll have to think about it. Gareth might not even want me. It’s a discussion that will be had closer to the time with the England manager, someone at Arsenal and Gareth Southgate.”

“It’s a good thing that people aren’t being held back to play in the senior side if the manager thinks they’re ready. At the same time I do think we take our U21’s seriously,” he added.

The ideal option for Oxlade-Chamberlain is to feature for Gareth Southgate’s side in the next summer’s European Under-21 Championships, rather than being a part of the first team squad.

The Gunners midfielder has the enough experience under his belt after playing with Arsenal and England first team. He and Shaw could fire the Young Lions to win the tournament in the Czech Republic.

Do you think Roy Hodgson should allow Alex Oxlade-Chamberlain and Luke Shaw to take part in the 2015 UEFA European Under-21 Championship?