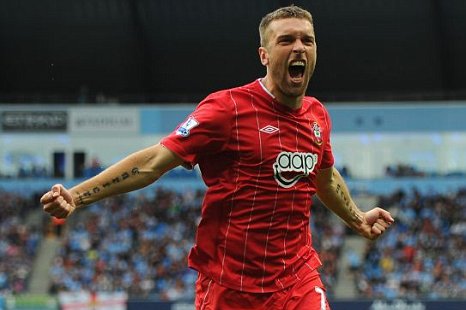 Southampton’s Rickie Lambert pictured is the surprise call-up as manager Roy Hodgson names his England squad for their friendly against Scotland.

Lambert could be making his first cap for his country in the coming week. The 31-year old was drafted in as Daniel Sturridge and Andy Carroll are both sidelined with injury.

Another surprise is Wayne Rooney’s inclusion, despite the fact he’s missed Manchester United’s pre-season friendlies due to an apparent injury.

Wilfried Zaha hopes to add to his solitary cap for England, as he’s been in fine form for United during their pre-season tour of Asia.

Manchester United once again boast the highest number of club representatives in the squad (8).

The friendly will take place on the 14th of August at Wembley Stadium. England will be big favourites, but Hodgson could use the game as a chance to give players with a lesser number of caps a chance. Lambert will be hoping to get some game time as recognition for a fine debut season in the Premier League, while one-cap Wilfried Zaha hopes to shine to better his chances of future call-ups.

With the 2014 World Cup at the end of the coming season, some players may only get this chance to prove they’re worthy of a call-up next summer. The pressure is on Rickie Lambert and co to perform if selected to play.