With all of the recent sackings and hirings in the Premier League, it’s fun, especially for the oddsmakers, to predict who’ll be on their way out and on their way up next.

There have already been a half-dozen managerial changes (four sackings, two ‘resignations’) in the first three months of the season, the highest-profile one being at Chelsea, where José Mourinho, now the prohibitive favorite to take over the England job, left the hot seat weeks into the season, giving way to Avram Grant. Since, Bolton, Tottenham, Wigan, Birmingham, and Derby have all seen managers go and come. Two moves have taken place in the last few days, as Birmingham just introduced Alex McLeish as their new manager, and Derby let go of Billy Davies (now likely in the running to replace McLeish as Scotland boss) and brought in former Wigan manager Paul Jewell just as quickly.

So, who’s next out the door, after Mourinho, Jol, Lee, Hutchings, Bruce, and Davies? There are three prime candidates right now, but there could soon be more, if this fervent pace keeps up. 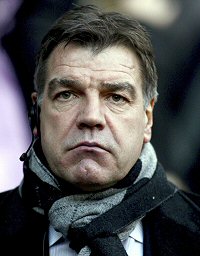 Only months after taking the reigns at Newcastle, it looks like Sam Allardyce is a dead man walking as the Magpies have fallen from the top half of the table and are already 15 points behind Arsenal. He just got the dreaded vote of confidence from owner Mike Ashley and chairman Chris Mort, and it might not be soon before his last rites are read, with upcoming matches at Blackburn and a home tie against the league leaders.

Defense, which was a mark of his time at Bolton, has been a weakness recently, as Portsmouth put four and Liverpool three in in the back of the net in embarrassing Newcastle at St. James Park. He’s attempted to do a lot of tinkering with the lineup, and at the moment, it’s not working, after a relatively promising start. If he can mix and match and somehow survive the next two matches, four winnable matches (vs. Birmingham, at Fulham, vs. Derby, and at Wigan) could keep him employed past Christmas. However, if he can’t capitalize on those favorable fixtures, the onset of the new year could see him searching for a new job, as Chelsea, the two Manchester clubs, and Arsenal await after Boxing Day. It could be quite a steep fall for a guy who, not too long ago, could have been a viable candidate for the England job. Another popular choice currently is Middlesbrough’s Gareth Southgate. He was a fan favorite as a player, but in a ‘what have you done for me lately?’ world, time and patience may be running out for him. Boro haven’t won since September 1st – in numbers, that amounts to a 10-match winless streak, as of a 3-0 drubbing against Aston Villa at the Riverside – and are hanging perilously close to the relegation zone, out of the bottom three due to being one better on goal difference than Sunderland.

His side has been woeful in front of goal, with only five tallies to their credit in those ten matches, with 22 goals going against them in the same period.

Only two of Boro’s six December matches are at the Riverside, and that doesn’t bode well for Southgate’s future, considering Boro has been at their worst away from the comforts of home. It might be difficult for Steve Gibson to give him the boot, but if things don’t get turned around in a hurry, something will have to be done to keep Boro from dropping into the abyss, which they’re quickly spiraling towards. 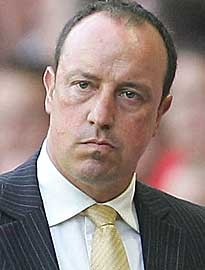 Right now, however, while those two might seem the most ‘worthy,’ the most popular choice might be Liverpool’s Rafa Benitez, who might get the boot more because of his recent issues with the club’s owners than for the results. His fate may be decided by Liverpool’s Champions League match with Porto, which will determine whether or not they still harbor hopes of advancing to the round of 16, or if the UEFA Cup (or elimination from Europe) awaits.

Tom Hicks and George Gillett didn’t take too kindly to Benitez’s ‘insubordination,’ a public outburst about their lack of knowledge of the transfer market brought on by his frustration at not being able to sign AC Milan defender Kakha Kaladze in the January transfer window.

Getting rid of him might have not seemed so outrageous had his comments occurred just a month ago, shortly after Liverpool’s low point of the season thus far, a 2-1 loss to Besiktas that dropped them to the bottom of their Champions League group and put them in the must-win position they’re in right now in Europe. But, if Liverpool continues to win, and remain in contention in the Premier League and give themselves a chance to advance in the CL, there won’t be any real reason to sack him, both because he seems to have realized his error and is intent on putting it behind him, because he’s winning, and because the fans won’t take too kindly to the incompetent owners of their Liverpool Reds soccer franchise sacking a successful manager.