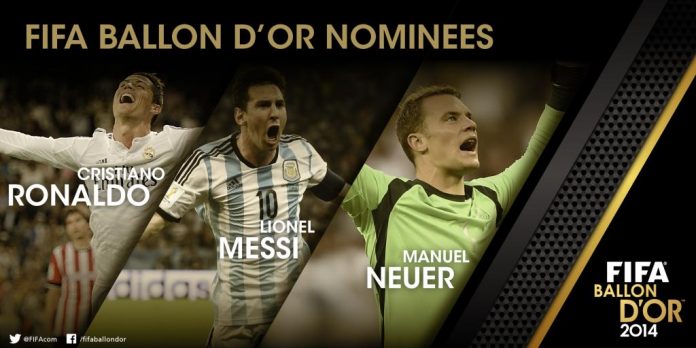 The shortlist for the 2014 FIFA Ballon d’Or has been released and it, unsurprisingly, includes: Cristiano Ronaldo, Lionel Messi, and Manuel Neuer. In terms of goals scored and assists made, Cristiano and Messi share the spoils as Cristiano has 55 goals while Messi has 21 assists. Of course these stats are not applicable to Neuer but it should be noted that Neuer has kept 28 clean sheets in his 60 games in 2014 for club and country, almost 50%. In terms of titles, both Cristiano and Neuer have won 3 titles while Messi will finish the year empty handed in that department. Cristiano leads the race in terms of records matched or broken and individual awards won yet it must be said that on the grandest stage of them all, the World Cup, he did poorly (even though Portugal as a whole were poor). While Messi reached the final and Neuer of course lifted the trophy.

So, with the records, achievements, and ability these 3 have demonstrated in 2014, who is the closest for the Ballon d’Or? Will Cristiano win his 2nd successive one or will Messi add to his record collection? Or will Neuer make the biggest surprise and be the first goal keeper since Yashin almost 50 years ago to win the Ballon d’Or?