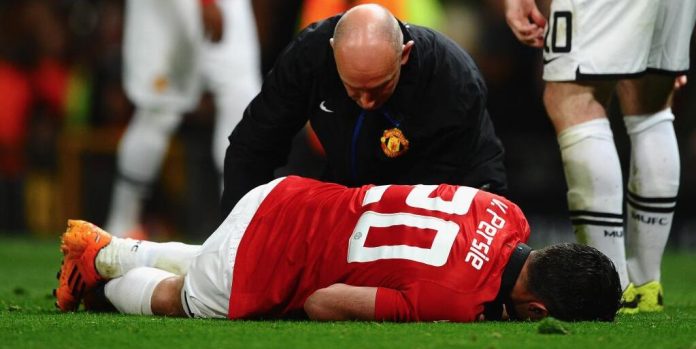 Manchester United manager David Moyes believes the Robin van Persie injury isn’t as serious as first thought, despite the Dutchman being carried off on a stretcher late on in the 3-0 win over Olympiakos on Wednesday.

The striker went down under a heavy challenge nursing his left leg, and there had been fears that the 30-year-old was set for a spell on the sidelines.

But Moyes, speaking after the game, said that Van Perise may have got off lucky,

Moyes told the BBC: “[The injury] doesn’t look that bad, he’s had a knock on the back of his knee.”

Van Persie’s hat-trick saw United overcome a two goal first leg deficit against Olympiakos to progress to the quarter finals of the Champions league, and Moyes was quick to praise his star man,

“To score a hat-trick in the Champions League is a big thing,” said Moyes,

“There are only certain players in the world who are capable of it and Robin van Persie is one of them.”

What do you think? How badly would United miss the Dutchman if injured? Let me know in the comments below…