Things really are going from sh*te to worse for Robbie Earle at the minute!

After being sacked by ITV yesterday for flogging his complementary press tickets (which are intended solely for the use of friends and family) to a Dutch beer brand yesterday, the former pundit has now had his profile removed from the official ‘England 2018’ World Cup bid website.

A block of press-allocated tickets were used by the Bavaria beer company to gain access to the opening Group E clash between Holland and Denmark in Johannesburg on Monday – tickets which Earle had handed to a marketing company working on behalf of the Dutch brewers – which resulted in 36 Oranje-clad female models being turfed out of the stadium.

It is being rumoured that Earle will now be stripped of his ‘England 2018’ ambassadorial role, as the bid team are keen to distance themselves from anything that may adversely effect their campaign to ‘bring football home’ – in light of the recent Lord Triesman scandal.

“I hope when people hear the full story they will see me in a different light.

I have absolutely no connection with any marketing ambush agency and have not profited in any way from these tickets.

I didn’t think I was doing anything wrong.”

No comment has been made by the team behind the 2018 campaign, but the 45-year-old’s profile has been removed from their site, after the former Wimbledon midfielder was first announced as one of the 50-strong list of official ambassadors in October of 2009. 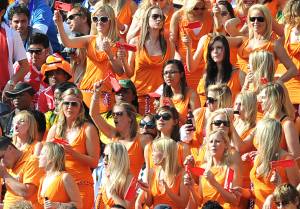 The 36 fillies in question

For someone who has basically just given a group of attractive young women in fairly non-descript, orange mini-skirts a handful of tickets for a football game – Robbie Earle sure has been handed the sh*tty stick over this one.

Tough it out Rob.

If Ron Atkinson can worm his way back onto our screens despite his brazen Bernard Manning-esque slur in 2004, then I’m sure you’ll be forgiven in time – you just may have to find something else to occupy your time for the next six years!