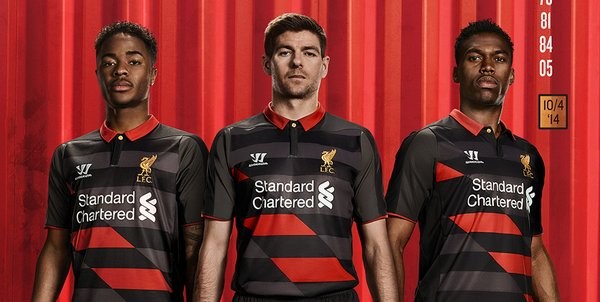 Liverpool have unveiled their third 2014/15 kit by Warrior, with an unprecedented chequered sash added to highlight the club’s potential new era of success on the biggest stage.

Liverpool have qualified for the Champions League for the first time since 2009, finishing second only to Manchester City last season in what was a stunning campaign for Brendan Rodgers men. The new third kit boasts a brave new design, the likes of which never before seen at Anfield, with the Merseysiders entering into an exciting new age in their history.

Equipped with the latest kit technology from Warrior, the 2014/15 third kit has a polyester mesh pique added to the main body of the shirt, while also a set of high-stretch breathable mesh panels in vital areas so as to allow for greater diversity of movement, whilst also enabling increased air flow to regulate body temperature.

The new chequered design is offset by a classic red collar, with the traditional Liverbird appears in gold, while the commemorative 96 logo has been placed at the nape of the neck.

Check out the gallery below: