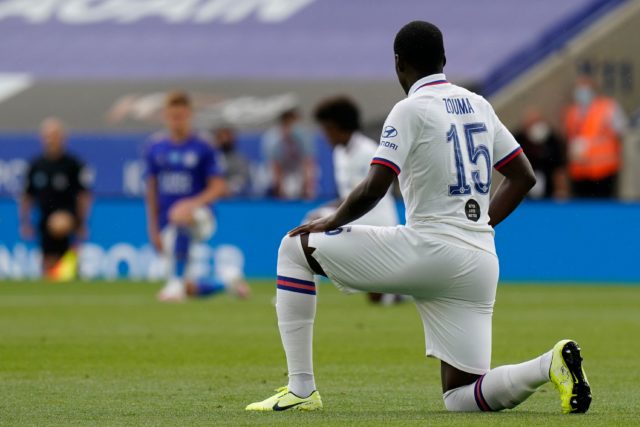 According to reports from France, Chelsea have offered Kurt Zouma to Paris Saint-Germain ahead of the summer transfer window.

The central defender has racked up 34 appearances across all competitions this term. However, Frank Lampard, who is looking to sign a central defender, doesn’t see him as indispensable to the Stamford Bridge club.

Zouma, who is valued at around £27m, could be sold by the Blues as funds need to be raised through player sales. With the aim of reducing the club’s wage bill, Zouma is the one who is most at risk of departing in the upcoming window.

TF1 reporter Julien Maynard claims that PSG boss Thomas Tuchel admires Zouma, and that Chelsea have offered them the chance to sign the defender.

However, the Express has reported that no discussion has taken place between the two clubs, while two Premier League clubs are looking to sign Zouma as well.

The report claims that Spurs are heavily interested in signing the French defender, with Jose Mourinho ‘keen’ to land him.

Spurs need to sign a central defender this summer with Jan Vertonghen all set to leave the club upon the expiry of his contract.

Mourinho has suggested to Spurs chairman Daniel Levy to consider Zouma as a priority target in the upcoming window.

However, Spurs could face competition from Everton, with Carlo Ancelotti looking to bring the 25-year-old defender back to Goodison Park this summer.

Zouma spent the 2018-19 campaign on loan with the Toffees, featuring in 32 league games and Ancelotti is keen on him.

Everton are heavily linked with a move for Lille’s Gabriel, but Zouma would be a terrific signing for them as well.