This weekend sees Real Madrid face city rivals Atlético for the third time in less than a month.

Atlético Madrid won the Spanish Super Cup over two legs last month with an aggregate score of 2-1. These two sides also met in the final of last season’s UEFA Champions League back in May. It was their final game of the 2013-14 season, meaning Saturday will be the third meeting between these two in each of their last five competitive matches.

After heavy investment over the summer, Carlo Ancelotti’s Real Madrid got off to an unconvincing start in La Liga with a 2-0 win at home to newly-promoted Córdoba which saw Cristiano Ronaldo only seal the game in the 90th minute.

They then blew a 2-0 lead to lose 4-2 at Real Sociedad before the international break. Not injuries, no one sent off – simply poor defending and a lapse in concentration.

Atlético Madrid saw a lot of of their championship winning players depart over the summer – Thibaut Courtois, Filipe Luís and Diego Costa all moving to Chelsea alone. David Villa went to New York City FC and Diego to Fenerbahçe.

Diego Simeone’s side were held 0-0 at Rayo Vallecano to start their season before beating Eibar 2-1 at home.

Cristiano Ronaldo is fit after missing Madrid’s last game through injury. Javier Hernández is available to make his debut after joining on loan from Manchester United on transfer deadline day.

Head coach Diego Simeone is suspended so will be sitting in the stands. His assistant Germán Burgos will be giving out the instructions from the sideline. Arda Turan played in both of Turkey’s games during the international break so should be ready to return after missing Atlético’s final game before the international break.

Cristian Rodríguez is a doubt with a calf injury. 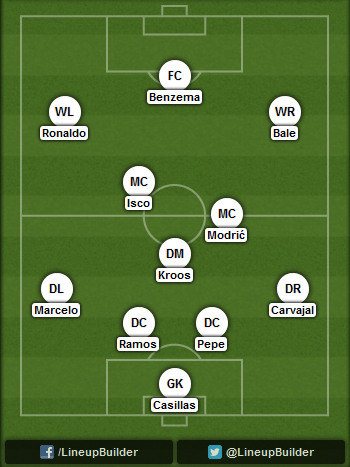 Real Madrid lack an out-and-out holding midfielder in their team, made worse by Sami Khedira’s layoff. Toni Kroos is a fantastic ball player and great at dictating play and maintaining possession but I’m not convinced by his tackling ability. Luka Modrić does his bit off the ball these days, but again is not naturally defensive-minded.

Ronaldo’s return will see either James Rodríguez or Isco demoted to the bench. Rodríguez does little defensive duties. 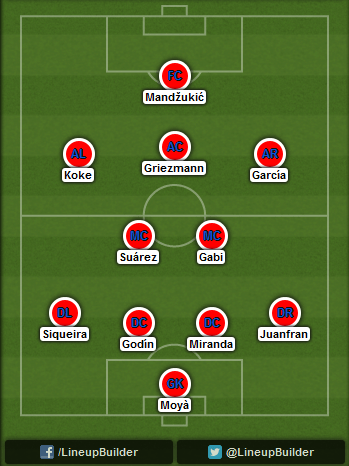 Mario Suárez has the tough task of replacing Ivan Rakitić this season. The Spaniard is also tireless in midfield and good on the ball – so certainly has the potential for doing that. His duties in this game, alongside Gabi will be to prevent attacks coming through the middle.

Cristiano Ronaldo vs Juanfran
Real Madrid have won only one of the last four meetings against their local rivals. That Champions League final was also 1-1 after 90 minutes. Cristiano Ronaldo’s only goal in the game came in the final minute of extra-time, from the penalty spot. He has two goals in these four mentioned meetings. It may be fair to say Juanfran has done a good job to this point. Certainly eyes will be on this matchup on Sunday as Ronaldo, as ever, is expected to perform.

Gareth Bale vs Guilherme Siqueira
Atlético Madrid’s summer signing from fellow La Liga side Granada could be thrown in at the deep end if starting this weekend’s game at left-back. Gareth Bale scored two for Wales at the weekend – albeit one with his head and the other from a free kick. The Welsh winger is deadly running at defences and can be expected to be one of Real Madrid’s match winners in this game.

Toni Kroos vs Gabi
Real Madrid will look to control possession and dictate the play. Toni Kroos is perfect at doing that in the middle of the park and is at the beginning of forming a good partnership with Luka Modrić who is good at doing similar. Their opponents will be looking to press them high up the pitch and counter – Gabi may be one of those in the middle of the park to put the pressure on the likes of Kroos. Will anyone win the ball off the German midfielder though?

Prediction: Real Madrid 1-1 Atlético Madrid
Real Madrid looked unbalanced a fortnight ago and Atlético Madrid have kept all their recent games tight excluding the Copa del Rey and extra-time of the Champions League. The defending champions may have lost a few key players over the summer but still look strong at the back.