2007 was another disappointment for the team established in 2005 in Utah. It was just like their first two seasons in that they ended one spot off the bottom of the league table. They won six, drew nine, and lost fifteen in a season that can be described only as another building year.

Coach Jason Kreis, himself a former MLS star striker, is now trying to build a team in his likeness, and it may be working. A win over Everton FC and Boca Juniors in last season’s mid-season friendlies may show signs of what is to come for the club.

Midfielder Dema Kovalenko was acquired from New York. Alecko Eskandarian and Atiba Harris were both traded to Chivas USA. A star in college for University of California, Santa Barbara, goalkeeper Kyle Reynish was drafted to add to the talent at that position.

Nick Rimando will have a lot to deal with between the sticks once again. He will also be pushed by US U-20 Chris Seitz, who will see some playing time. Look for them to come up with several big saves, saving not just shots, but matches for the club. 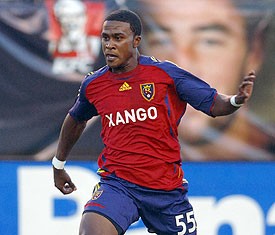 Robbie Findley led the team with six goals for RSL last season along with two others before he was picked up from the LA Galaxy. In his second season, things can only pick up.

The young talent on the team will have to learn about the MLS quickly. Scoring goals should be their priority, because if they only manage thirty-one again, with a defense letting in forty-five, it will be another long season for them. If they can get their goal difference to about zero, success will eventually come.