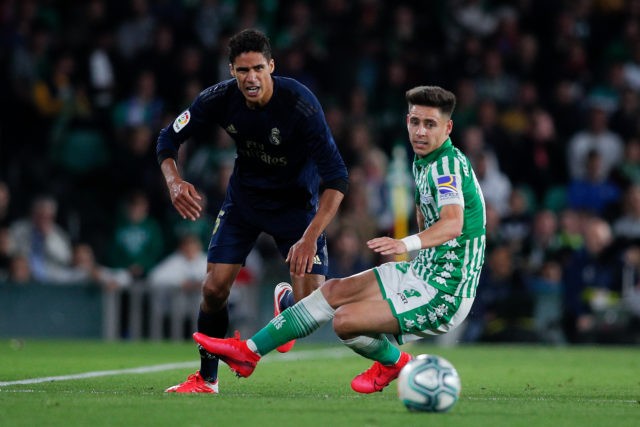 Spanish champions Real Madrid are prepared to consider the sale of Raphael Varane this summer amid his reluctance to put pen-to-paper on a new contract.

The centre-back has spent nearly a decade with Los Blancos where he has registered 346 appearances in all competitions.

He continues to remain a regular starter at the heart of the defence, but Los Blancos are concerned with his contract situation.

The Frenchman’s current deal expires in June 2022 and he has shown no indication that he could extend his stay with the Madrid giants.

Manchester United and Chelsea have been credited with an interest in the Frenchman with the former said to have made an approach for him two years ago.

It is revealed that Los Blancos may consider Varane’s sale for around €50 million (£44m) if his contract stand-off is not resolved by the summer.

Both United and Chelsea may be on the hunt for a new centre-back when the current season concludes.

The Red Devils have regularly swapped between Victor Lindelof and Eric Bailly for the right-sided centre-back position.

Lindelof’s performances have led to some criticism from the fans while Bailly has struggled to overcome his regular niggles.

Hence, Varane could be an ideal player with his experience to partner Harry Maguire and boost their title prospects next term.

Meanwhile, the Blues have recently switched to a three-man backline under Thomas Tuchel, but they may revert to a back four in the future.

Thiago Silva, who is already 36, has been their best centre-back this season following his arrival on a free transfer in August last year.

Silva is not a long-term option and Varane could be a solid addition for them as he is only 27 and entering the prime of his career.

The former Lens graduate could also pair up with the veteran star for a season or two before emerging as the leader of the backline.

Despite the financial impact of the coronavirus pandemic, buying Varane for around £44m can be regarded as a bargain for any interested side.