Real Madrid winger Angel di Maria, star of the Champions League final, has yet to fire for Argentina in the World Cup so far. The front page of Spanish newspaper AS says that Real Madrid are keen to sign Colombia’s highly rated forward James Rodriguez, who has scored a breath taking goal against Uruguay in the round of 16 matches at the World Cup.

The sensational forward has scored five goals this season and would cost around £31m though Monaco are bound to charge more. Not only his performance in the World Cup would inflate his asking price, but at the same time he has contract till 2018 as well.

So, Madrid looking to offload Argentine winger Angel di Maria in order to recoup the money to sign James Rodriguez. 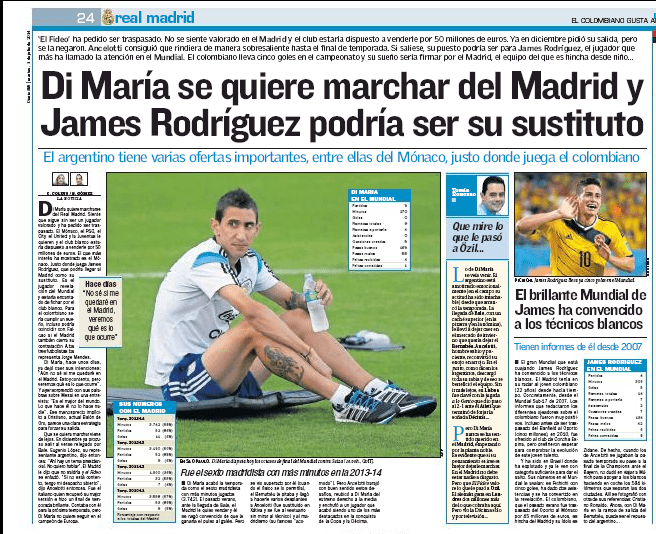 Di Maria has a contract till 2018 but the Argentine is unsure what future holds for him at Madrid. “I don’t know if I’ll stay at Real Madrid, we’ll see what happens” he said.

He went on to say that his Argentine team-mate Lionel Messi is the best player in the world, which to us is a pretty obvious statement, but Spanish newspaper AS interprets it as a gesture of showing contempt towards Ronaldo and blames it on Di Maria for plotting an exit strategy.

Basically, the claim is Di Maria wants to leave Real Madrid and the Argentine is trying his best to force his way out. Therefore, Madrid have shifted their focus on Rodriguez, who is leading the race for the Golden boot, having scored five goals in the World Cup so far.

AS reports that several European heavy weights are interested in signing Di Maria, like PSG and Manchester United. However, any potential buyer will have to pay €50m to sign him in the summer.