The Gunners had tried to sign Carvalho last season but their offer didn’t meet Sporting’s requirements. Carvalho has a reported €45m release clause which Arsenal were not willing to pay at that time. 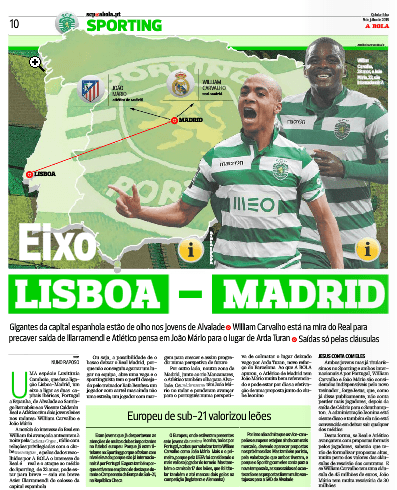 Carvalho caught the attention of big European clubs this season again with his outstanding performances for Portugal in the U-21 Euro competition, where he was named the player of the tournament.

In May, Portugal newspaper O Jogo reported that Sporting were willing to sell Carvalho to Arsenal for a slightly reduced fee, provided the Gunners include Joel Campbell as a part of the deal.

According to A Bola today, La Liga giants Real Madrid are considering making a move for Carvalho, if the club can get rid of Illarramendi.

Carvalho perfectly fits the profile desired by Benitez – a young midfielder with a lot of potential to develop. The report also says that Madrid will have to at least come close to the buyout clause (€45m) for there to be a deal.