According to Pablo Garcia Cuervo, a journalist at Radio Marca, Florentino Perez has finally given in to Ramos’ demands of joining Manchester United.

Quoted by TMW, Garcia claimed that Perez wanted Casillas out of the club this summer and is now ready to let Ramos leave. The pair had a falling out over Ramos’ unacceptable contract terms and now the Spanish international wants to join Manchester United.

Further Garcia claimed that the deal might drag on as Perez wants to portray Ramos in a negative image towards the fans. According to him, Perez wants to stain his loyalty towards the club because of their disagreement over a new contract.

Garcia claimed: “Sergio has made his mind up. Florentino also wants Sergio to leave, but Real Madrid want it to seem like Sergio is the one who wants to leave because he isn’t very ‘madridista'”

He added: “If Florentino Pérez wanted to keep Casillas, he hid it very well. The same is happening with Ramos”.

Manchester United have further piled on the pressure by asking the player to hand in a transfer request. The Old Trafford outfit are willing to make him one of their highest paid players and want him to lead them back to the top. 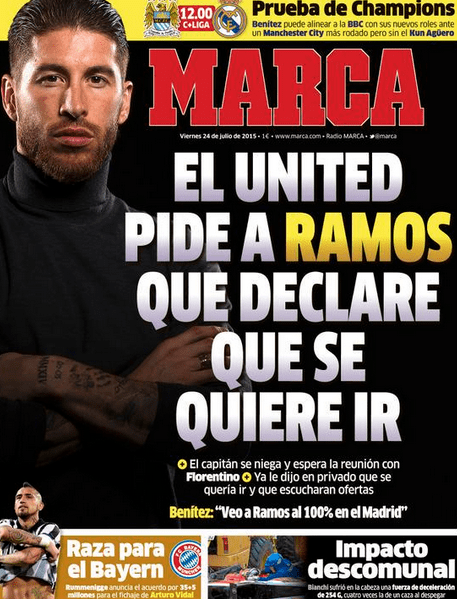 The next few days will certainly be interesting especially if Garcia’s claims are true and Perez has finally agreed to a transfer. However, there is no doubt that United will have wrapped up an amazing window if they manage to snap up Ramos, one of the best defenders in the world.