According to MARCA, Real Madrid are all set to complete the signing of David De Gea.

The Spanish giants have been locked in talks with Manchester United over the last few weeks and it is believed that both parties have an agreement now.

Los Blancos are prepared to pay United a sum of €25m plus bonuses for the services of the former Atletico Madrid player. 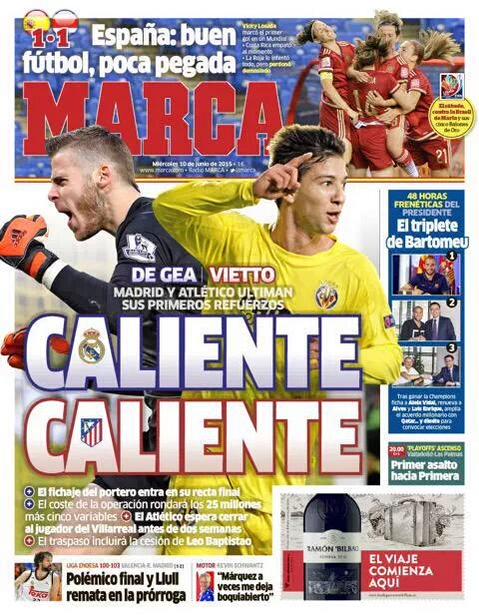 According to the reports, a phone call confirming the payment is the only thing left in order for the deal to happen.

De Gea has enjoyed an outstanding campaign with the Red Devils and was influential in their return to the Champions League. However, the Spanish keeper is keen to return home to Spain and Real Madrid were his preferred destination.

De Gea will replace club legend, Iker Casillas at the Bernabeu next season.

Manchester United thrashed out a mega money offer to ward off Madrid’s interest, but the Spaniard is not motivated by money and is keen to make a step up.

The fee discussed by Marca, will make De Gea the most expensive goalkeeper in the history of Real Madrid. However, in realistic terms, €25m is an outstanding coup for the Spaniard, who is one of the best keepers in World football and is still far away from his peak.

De Gea is set to become the first signing of new manager, Rafa Benitez, who will then turn his attention towards Kun Aguero.

Having already resigned Casemiro from Porto, Real Madrid seem keen to complete their business early and plan for next season.