India
Home News raul on the way to self reinvention

On Saturday night in the match against Racing Santander, Raúl did a strange thing. No, it was not the 4th minute as-easy-as-you-like strike past Tono, it was not even the marvelous Captain Fantastic performance that he gifted the 80,000 odd Bernabéu faithful gathered to watch their team win and win with thrall; instead it was the brave audacity of him to ask Wesley Sneijder for the ball to be left for him to strike. Not unusual for a striker, that’s for sure, and especially not for someone of Raúl’s goal poaching instincts. But it does seem somewhat amusingly bizarre when you realize that it was actually a dead ball situation with a potentially dangerous free-kick to be taken from just outside the Racing penalty area. 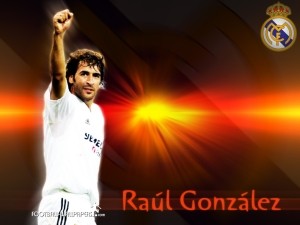 Raúl, of all player, asking his team mates to let him curl a free-kick? This must be a joke, right? No, this isn’t a joke and the goal that Raúl scored from that free-kick wasn’t a joke either. It wasn’t a joke to the Racing goalkeeper Tono who watched helplessly as the ball curved into the back of his net; it wasn’t a joke to the Real fanatics assembled inside the Bernabéu for the match who went absolutely bonkers after the goal; and it certainly wasn’t a joke to Raúl who with that goal is firmly back as the leader of the Pichichi.

Raúl is a reinvented, rediscovered being these days and the turnaround is laid bare for even a blindman to see. Gone are the days when the man with the most frightening record in European club football with 5 La Liga trophies and 3 UEFA Champions League medals was lurking in the shadows of his old ghost, trying hard but not succeeding to recover his twin brother from the attic. Gone too is the labouring Raúl , dropping deep, running all over the place and playing in all sorts of weird positions just to accommodate himself in the first team. 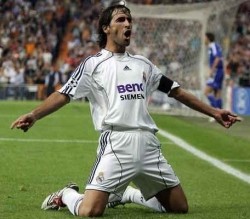 This Raúl is vastly different. The Madrileno might not be at the peak of his ability but he is certainly a reformed, resurrected and refurbished footballer these days. With 8 goals in 14 league matches so far this season, Raúl is joint top scorer with Lionel Messi and Luis Fabiano. One can discern a spring in his steps, a conviction in his rhythm and a rhyme in his game. The emblem of the biggest and most successful club in football history (read Real Madrid), Raúl is now enjoying the most successful spell both in his and the club’s last three years.

Real Madrid might have torn La Liga title from arch rivals FC Barcelona’s grasp on the last day of the season in sensational fashion enough to knock the steam out of The Da Vinci Code they did so mechanically, employing the three principles of Capelloism which are: a) defend, b) defend and c) defend. Raúl was able to excavate the back of the opposition net just 7 times last season and was often played as a winger and even as a central midfielder in an attacking position by the then Real manager Fabio Capello. So much so that Raúl had to warm the bench at certain conjectures last season under Capello.

But this season there has been a wind of change ranting at the Bernabéu. Capello’s caveman football has disappeared and replacing it is Bernd Schuster‘s organized football based on attack and midfield creativity. True, Schuster still hasn’t managed to pick his best first xi, hasn’t presented Arsenal or Barcelona football to the Madridistas and has been found tactically lacking in certain games so far, but there’s no suspicion that Real’s game under the German is more pleasing to the eye and appeals to the finer senses. And with the surge of Real Madrid, there has been an escalation in Raúl’s form too. 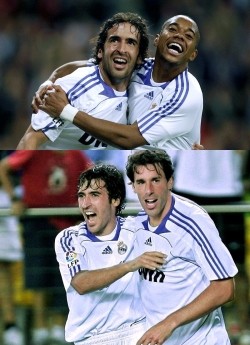 So far Raúl has featured in 14 La Liga and 5 Champions League matches and has already scored a total of 10. More importantly he has been played alongside Ruud van Nistelrooy as a striker and not as a makeshift something-or-the-other. What Schuster has done is restore Raúl in his favoured position and the effects, all positive, can be felt in all quarters. Of course Raúl has been aided by the contribution of Robinho, Guti and Wesley Sneijder from the attacking midfield department but no one can take away Raúl’s input into this still settling but exciting Real Madrid team.

Against Santander on Saturday Raúl was the best player on the pitch and the Santiago Bernabéu realized it. Chants of “Raúl! Raúl!” were ringing wild and at the heart of the emotion soaking the Bernabéu was the belief that the 30—year old Raúl was back to his best. In a club where entertainment and efficiency are held at par and where “winning ugly” doesn’t equate to smiles and praise (ask Capello who was sacked immediately after last season’s title triumph), Raúl is the King, the ultimate warrior and pride.

And now that Raúl has recaptured his lost form and since no one doubts his class, is it time for an international recall? Raúl’s performance before last season had been so wretched that Spain coach Luis Aragonés had no option but to drop him from the national squad. He even dropped the player with the distinction of being the all time highest goalscorer for Spain (with 44 goals in 102 matches) from the last few games of the Euro 2008 qualifiers when Raúl looked more and more like a player who was enjoying his recovery.

But can Aragonés keep on ignoring Raúl? Real Madrid custodian Iker Casillas doesn’t think so. After the 3-1 win over Racing, Casillas said, “If he (Raúl) continues like this, Luis Aragonés will take him to the European Championships… He has been a fundamental player for the national team and wants to return.” And so he will, so he will.