When the smarmy and ever-rictus-wearing Steve McClaren was handed the sticky reins of the England bandwagon, his first statement of intent was to drop one David Beckham from not only the team, but also from the squad altogether.

Beckham’s high-profile was alleged to have isolated some members of the team, and his status as an “untouchable” under Sven Goran Eriksson believed to have upset both fellow players/challengers for his place, as well as England fans up and down the country. However, we all know how this story has ended; with a recall for Beckham and a serious amount of damage done to McClaren’s already-wavering credibility.

Faced with a similar situation, Spain manager Luis Aragones (he of the “let’s call Thierry Henry names” fame) has stuck to his guns, refusing to call upon record goalscorer González Blanco Raúl despite the Real Madrid captain’s recovery of form at the beginning of this season (one gets the idea that in actual fact, a comprehensive and irreversible decision was taken immediately after the Belfast debacle) and in spite of the injury to top striker David Villa.

A Raúl has been called upon, but a less famous (although by no means unqualified) one, Raúl Tamudo of Espanyol. Tamudo has 113 goals in 283 games for Espanyol, and 4 goals in just 9 games for Spain.

When Raúl was dropped, his lack of form for club and country was cited as the main factor in the decision, despite the good start to the season made by both Real Madrid and the player. Indeed, Luis Aragonés only scruple in dropping the player was said to have come due to his concern that such news might overshadow the preparations for upcoming Euro 2008 qualifiers, leaving it as clear as day that Raúl’s high-profile was as much an issue with Aragonés as was his alleged under-performing.

This issue becomes more intriguing when the recently revived rumours regarding team disruption are added to the mix. The (er-hem) reliable source of AS has claimed that despite Luis Aragonés assertions that the door is “never closed” to Raúl (has Aragonés been working with the same PR man is Steve McClaren?), Aragonés is in fact extremely reluctant to call upon the marksman because the coach perceives him as a nefarious influence in the dressing room, along with his fellow members of the “trio de Ginés Carvajal” (Raúl, Salgado and Cañizares), who are believed to have stayed up late at night during the World Cup, vociferously criticising Aragonés’ tactics and the performance of team-mates.

The debate has now reached the point which Aragonés sought so dearly to avoid, with training sessions being disrupted by fans screaming Raúl’s name and testimony flooding in from all quarters (from Laudrup, and here from Espanyol’s Luis GarcÃ­a, who is, bizarrely, one of the men keeping out the Real captain), describing the Real Madrid captain as a model professional, a player who, like Beckham, is a millionaire, has won almost everything, is idolised by millions, and yet remains humble and trains hard. 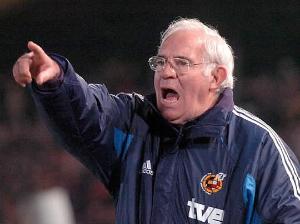 All of which makes one wonder whether Aragonés isn’t making a huge mistake allowing what is clearly a personal grudge (in some parts of the press, they are calling the strained relations between coach and player a “divorce”!) to obscure his judgement about one of his players.

It is something indeed when a player such as Soldado, who is behind Raúl in the pecking order at Real Madrid, has played more games for the national selection in the last year than his own club captain.

For my money, Aragonés has got things wrong and is being led by stubbornness (the same obstinacy shown by McClaren when delaying Beckham’s return to the England fold – readers note that I was always against Beckham’s exclusion, a bias which I am quite willing to admit).

In such a crucial game as is Spain’s tie against Denmark, it seems to me illogical to turn to Tamudo, a man who, although having scored regularly for Espanyol for over ten years (last season was not his best), has very little experience (just 9 matches) of the demands of international football.

Especially when a player with the calibre and the respect of González Blanco Raúl is available for selection.