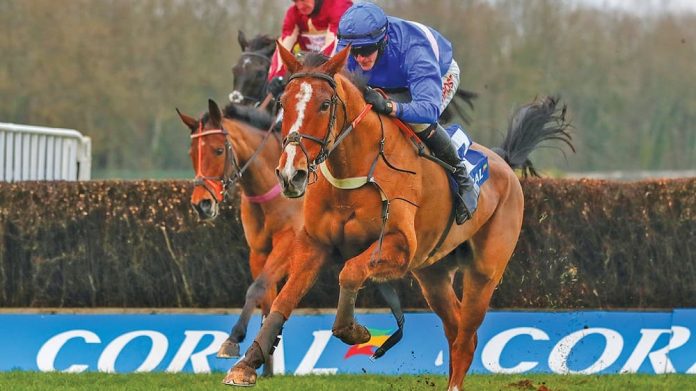 The Coral Welsh Grand National over an extended 3m 6f is the big betting race on Bank Holiday Monday, 27 December (2:50). Although the showpiece Grade 3 handicap chase at Chepstow is behind closed doors, it remains a real highlight. SportsLens tipsters give their 2021 Welsh Grand National tips based on the five-day entries.

As ever, the stats are our experts’ guide. One of the key Welsh Grand National trends is betting on a race-fit horse. All of the eight most recent winners had at least two previous runs in the National Hunt season under their belt. Three of the last six came to Chepstow off the back of three outings in the campaign. Look for horses who last appeared on the racecourse between three and five weeks beforehand.

Favourites have a good recent record with three of the previous five market leaders obliging. This year’s leading fancy hasn’t had a run, however, so consider carefully whether it’s worth backing that one on horse racing betting sites first. Key trials for the Welsh Grand National include the London National at Sandown, Midlands National at Uttoxeter and Ladbrokes Trophy (formerly the Hennessy Gold Cup).

There was a time when eight-year-olds won this year in, year out but there is no real clear age profile based on recent renewals. Welsh Grand National winners have been as varied as six-year-olds up to a 13-year-old in the last five runnings. Other obvious pluses are course form at Chepstow, and a win or placed effort over 3m 4f or further. We’ll get to our experts’ 2021 Welsh Grand National tips after looking at the favourite:

Why Secret Reprieve has the shortest Welsh Grand National odds

Last season’s race winner, Secret Reprieve, is the default setting for the ante post betting. Trained in Wales by Evan Williams, this seven-year-old son of Flemensfirth landed the official trial for the contest and then doubled up on the big day. Secret Reprieve is 6lb higher in the weights than his three-length success in January, but that effort can certainly be marked up.

After jumping three out, it became clear that his girth was loose. Adam Wedge didn’t panic in the saddle, however, and Secret Reprieve stayed on for a comfortable success. Williams has kept this horse lightly-raced with taking the Welsh Grand National in again always a likely target. Secret Reprieve could still have plenty of further progress in him after just six chase starts too.

The potential presence of Native River among Welsh Grand National runners will also help his cause. If the top weight runs, then Secret Reprieve has a featherweight of 10st exactly on his back. The only negative is 352 days off the track. Bookmakers are prepared to ignore that, though, and Secret Reprieve is the 9/2 favourite with Betfred for a repeat bid. Our experts like the claims of others more.

Irish trainer Peter Fahey has an out-and-out stayer in The Big Dog, who should get conditions to suit in South Wales if the forecast rain arrives. This eight-year-old Mahler gelding finally gets a real test of stamina after winning the 3m 4f Irish Grand National Trial at Punchestown in February. The plan was for The Big Dog to run in the Irish National itself over Easter but the ground came up too sound.

He prefer a more testing surface. Every drop of rain that falls at Chepstow enhances his chances. It is a similar story with others but there was a lot to like about The Big Dog’s attitude on his last chase win. The way that he battled back despite jockey Jamie Codd losing an iron was really taking.

Wily handler Fahey knows he has a ground dependent horse but the Welsh Grand National often has soft or even heavy going, because of when it takes place. Deep winter conditions will be right up The Big Dog’s alley. Again, if Native River frames the handicap as expected, he will have a nice racing weight of 10st 7lb on his back.

Jonathan Burke is set to take the ride on The Big Dog here too. He has the minimum of two runs that recent Welsh Grand National winners all had. This looks an obvious bit of placing by connections too. The Big Dog is one of our 2021 Welsh Grand National tips at 7/1 with Bet365 as a result. His half-sister, Ms Parfois, twice placed over 4m and he isn’t the only representative by the same sire who could line-up here.

Bet on The Big Dog with Bet365

Just a short-head separated Highland Hunter and Deise Aba in the 3m 5f London National at Sandown earlier this month. This pair could re-oppose at Chepstow with both prominent in the Welsh Grand National betting as a result. The former is one of two entries for champion trainer Paul Nicholls and has a 4lb penalty for that success. Highland Hunter, an eight-year-old son of Subtle Power, only has the one run, though.

However, he won over 3m 2f at Carlisle as a novice in February and was later a fine fifth in the Midlands National. If the runner-up and subsequent Scottish Grand National hero Mighty Thunder re-opposes, then they could meet off a 10lb swing in the weights. It gives Highland Hunter obvious claims of turning the tables and explains why William Hill go 7/1 about his chances here.

Deise Aba, meanwhile, is 4lb better off for losing out on the nod at Sandown. A dual winner of the old Gainsborough Chase, now the Virgin Bet Masters, Philip Hobbs’ charge runs in the colours of the late Trevor Hemmings. Another eight-year-old Mahler gelding, Deise Aba is 2lb well-in to this race off his revised official rating of 142. He has to enter calculations on that basis and the revised terms with Highland Hunter.

Once more, connections will be praying that Native River takes his chance. With that previous race winner in the field, Deise Aba could race off exactly 10st. On that basis, he looks a great each way bet at a standout 14/1 with Bet365. If the London National is a key piece of form, and the market suggests it may well be, then backing both Deise Aba and Highland Hunter is what many smart punters will do.

Back Deise Aba each way with Bet365

Hold That Taught and Iwilldoit best of those out the handicap

Assuming Native River does line-up, then a number of Welsh Grand National runners will be out of the handicap. That hasn’t discouraged market support for Venetia Williams’ Hold That Taught, however. She has won the race twice before. In Hold That Taught, the Welsh Marches trainer has a six-year-old Kayf Tara gelding that won at Carlisle last time out and previously placed at this venue behind erstwhile online bookmakers‘ ante post favourite Ask Me Early.

A 6lb rise in his official rating puts Hold That Taught 1lb wrong but that hardly matters from potentially 5lb out of the handicap. Other back form includes a fine third behind Ladbrokes Trophy fifth Demachine. The Williams stable enters the festive period in fine form, so it would be no surprise to see further progress from Hold That Taught. Bet365 are a top-price Welsh Grand National odds of 8/1 about him.

When you consider that this season’s official trial winner Iwilldoit is 6lb well-in to the race but that much out of the weights, he effectively runs off his revised mark here. Trained in Wales by Sam Thomas, the eight-year-old Flying Legend gelding bolted up by 24 lengths here earlier this month. That taking performance off 130 shows Iwilldoit had tons in hand on the assessor.

A 10lb rise is more than fair on that evidence. If Native River doesn’t run, then the weights will go up by at least that anyway. Iwilldoit is two from three over fences; so, although light on chase experience, he is another of the Welsh Grand National tips from our experts. William Hill go 12/1 about him following-up and emulating Secret Reprieve from last season.

Bet on Iwilldoit with William Hill

Back these horses each way for the Welsh Grand National: