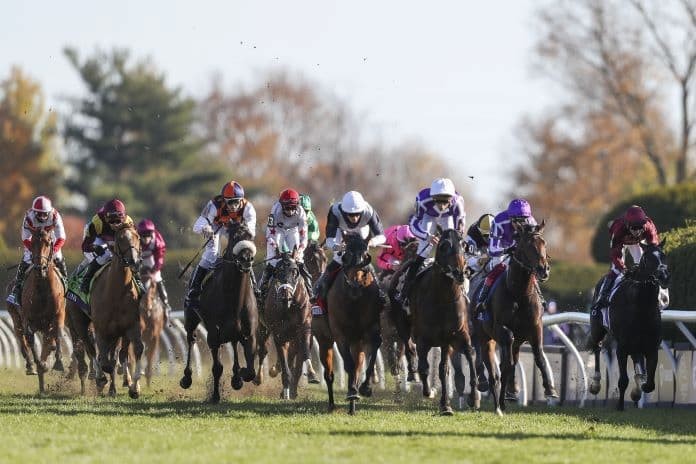 The Queen Elizabeth II Challenge Cup Stakes, this Saturday from Keeneland, is the main Grade 1 contest over the weekend that is often used as a prep race for the Breeders’ Cup Filly & Mare Turf on November 5.

When Is The Queen Elizabeth II Challenge Cup Stakes 2022?

Run on the turf over 1m 1f, the Grade One Queen Elizabeth II Challenge Cup Stakes is staged at Keeneland racetrack for 3 year-old fillies and mares – full race betting below.

Take your horse racing betting to the next level with BOVADA and receive a 75% matched deposit welcome bonus (up to $750) to use on the 2022 Queen Elizabeth II Challenge Cup Stakes.

It’s been run in her honour ever since and with the Queen’s death earlier this year we can expect a bumper crowd at Keeneland races this year to celebrate the race and Queen Elizabeth’s life, with Union Jack flags a plenty!

The Bill Mott yard have two wins to their name since 2014, but with four successes it’s the Chad C. Brown barn that have the best record in Saturday’s race.

Brown’s first win in the Queen Elizabeth II Challenge Cup Stakes came in 2012 with Dayatthespa and the added to that in 2018 (Rushing Fall) and 2019 (Cambier Parc). A blank year for Brown in 2020, but they didn’t have to wait long for their fourth win in the race when Shantisara took the honours 12 months ago in 2021 (watch again below).

The Queen Elizabeth II Challenge Cup Stakes is also often billed as a prep race for the Breeders’ Cup Filly & Mares Turf, which is run in a few weeks time (Nov 5). However, this Saturday’s Grade 1 is yet to produce a winner of the Breeder’s Cup race in the same season.

The closest we’ve got is the Joe Orseno-trained Perfect Sting, who won the Queen Elizabeth II Challenge Cup Stakes in 1999 as a 3 year-old and later went onto win the Breeders’ Cup Filly & Mares Turf the following season (2000) as a 4 year-old.

GINA ROMANTICA @ 7/2 with BetOnline – From the Chad C Brown yard that have a fine record in the Queen Elizabeth II Challenge Cup Stakes with four past wins. This filly has won two of her last four and wasn’t disgraced last time at Belmont Park when runner-up in the G3 Pebbles Stakes (watch below). As you can see, she ran on powerfully that day and having only had 6 career runs (3 wins), there should be more in the locker.

SHE’S GONE @ 30/1 with BetOnline – Curlin filly that has won 2 of her seven starts and trained by Victoria H. Oliver. Last in action at Kentucky when winning an Allowance race, so even though she heads here in winning form you feel she needs to take another step forward.

NEW YEAR’S EVE @ 9/2 with BetOnline – Three-time winning filly from the Brendan P. Walsh yard. Won the G2 Edgewood Stakes at Churchill Downs (watch below) earlier this year and later ran 8th in the Belmont Oaks and 3rd in the Saratoga Oaks. Last out running 4th in the already mentioned Exacta Systems Duelling Grounds Oaks (Listed) – a place behind California Angel (watch above).

BELLABEL @ 5/1 with BetOnline – Trained by Philip D’Amato and the winner of 3 of her 8 starts. Formerly trained in Ireland too, when with the Jessie Harrington team, but has since come to America and hit the ground running with two wins from three. Also ran a solid second behind the useful Spendarella in the Del Mar Oaks on Aug 20 (watch below) last time and on that form is a big player here.

McKULICK @ Evs with BetOnline – Another from the Chad C. Brown camp and looks to have a huge chance. This Frankel filly has won 3 of her seven starts and been placed in the top 2 in six. She’s won just over $1m in prize money, having won the G1 Belmont Oaks (watch above), with New Year’s Eve in behind, earlier this season. Was also runner-up in the Saratoga Oaks and last time out was a gutsy winner of the G3 Jockey Club Oaks at Belmont Park (watch below). She looks a big player on Saturday.

PARIS PEACOCK @ 10/1 with BetOnline – Coming over from the Irish yard of Jessie Harrington. We saw an Irish stable win the race in 2011 when the Aidan O’Brien-trained Together took the honours. Winner of 2 of her nine starts and been in the first two 7 times. An interesting raider and comes here in winning form too after taking Listed (watch below 5:20pm race on the clip) and G3 races at Gowran Park (Ire). Expected to go well.

We’ve already mentioned the good record of the Chad Brown barn in the race – winning the race four times since 2012. They’ve got two in the race, Gina Romantica and McKULICK @ Evs with BetOnline, but it’s the last-named of the pair that looks their better hope.

This 3 year-old Frankel filly has already won just over $1m in prize money and been successful in a Grade 1, when winning the Belmont Oaks Invitational earlier this season. She’s yet to finish out of the first three and last time out when winning the Jockey Club Oaks at Belmont showed a great attitude to knuckle down and get the job done.

McKulick can take this and then come back to Keeneland on Nov 5, where she is @ 11/1 with Bovada for the Breeders’ Cup Filly & Mares Turf.

Best Of The Rest

Bellabel ran on well last time out behind the classy Spendarella in the Del Mar Oaks and on that run looks sure to play a part too. We’ve also an interesting entry from the Irish yard of Jessie Harrington in Paris Peacock, who brings two good Listed and G3 wins to the table in her most recent runs.

See below the latest betting ahead of the 2022 Queen Elizabeth II Challenge Cup Stakes on Saturday Oct 15, at Santa Anita.