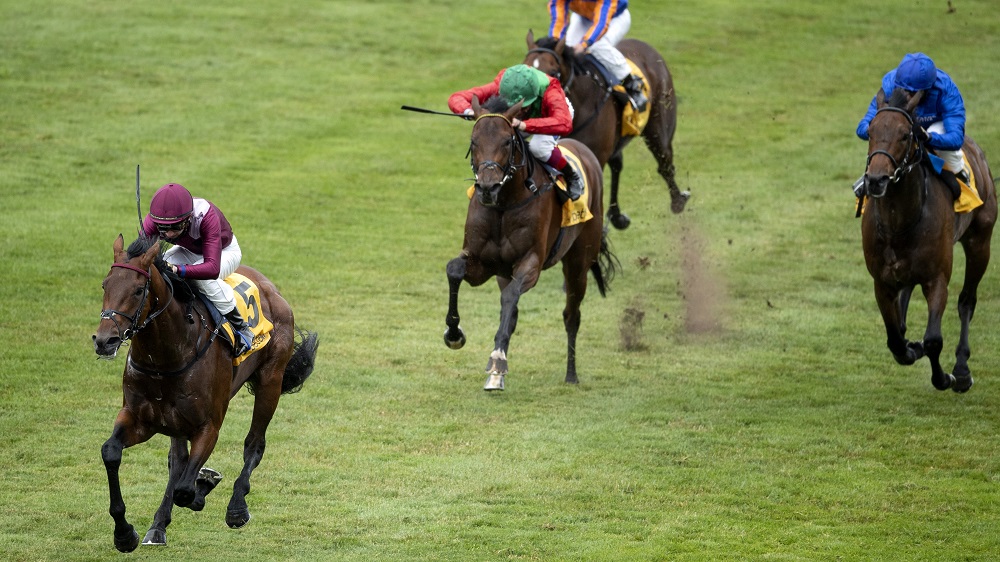 On British Champions Day at Ascot on Saturday, 16 October, the 1m 2f QIPCO Champions Stakes is the headline middle-distance race (3:50). It is also the penultimate event on a stellar card of Flat horse racing.

Frankel, Cracksman and Magical are all recent Champion Stakes winners. Transferred to Ascot from Newmarket in 2011, older horses have done so well in the race lately. In fact, only two three-year-old have won this since 2008.

Horses prominent in the Champion Stakes betting have a great record. Of the last nine victors, none were bigger than 10/1. Four of the last five favourites obliged too. All but one the previous 10 Champion Stakes winners had an official rating of 120 or higher. These are the very best Flat turf horses in training over 10 furlongs winning this, then.

The draw doesn’t offer any real clues. Four of the last six horses successful in the Ascot Champion Stakes last ran no longer than five weeks beforehand. Wins for Farhh, Noble Mission and Cracksman the second time around show trainers can lay one out for this race, though.

Why Mishriff is favourite in the QIPCO Champion Stakes betting

Only three of the 10 horses in the line-up have official ratings over 120. Mishriff ran no sort of race at all in the Champion Stakes at Ascot last year, so does have something to prove. Trained by John Gosden and son Thady, the yard won this twice with Cracksman. A four-year-old Make Believe colt, Mishriff has been a wonderfully versatile horse.

He dropped back in trip and landed the Saudi Cup on dirt over 1m 1f on reappearance. Mishriff then followed-up in the 1m 4f Group 1 Sheema Classic on Dubai World Cup Night. The fact that he handled the extra three furlongs when switched back to turf is a big plus. Mishriff was also far from disgraced when third to St Mark’s Basilica in the Eclipse at Sandown.

The winner completed a hat-trick that day after wins in the French 2000 Guineas and Prix du Jockey Club. St Mark’s Basilica also went on to land the Irish Champion Stakes from Tarnawa. Mishriff has 1 3/4 lengths to find on re-opposing rival Adayar from the King George over 1m 4f here, but connections have always felt 1m 2f is optimum.

That proved true in the Juddmonte International at York last time out. Mishriff surged clear up the Knavesmire and put the race to bed as he won easing down by six lengths. Unlike Adayar, who had a hard race in the Prix de l’Arc de Triomphe at Longchamp the weekend before last, he comes here fresh. That might swing things for Mishriff, who is the 6/4 favourite with Betfred with good reason.

Bet on Mishriff with Betfred

The only Godolphin horse among Champion Stakes winners was Farhh back in 2013. In Adayar, they have the Epsom Derby and King George hero dropping back in trip. A three-year-old colt by Frankel, Charlie Appleby’s charge comes out best on adjusted ratings but he was beaten over this distance on reappearance.

Adayar is clearly much better than that day, progressing past the winner of the Sandown Classic Trial, Alenquer, in no uncertain terms. Running in the Arc less than a fortnight beforehand wasn’t a problem for Magical, but the question is whether France’s most famous race has left its mark on Adayar.

He didn’t seem particularly suited by the way the race was run. It was set up for a closer, and Adayar only ran fourth. A stronger pace may have seen him to best effect. The fact that Adayar weakened in the final 100 yards and finished out of the frame is a worry. He did need his first run following a break, though, so could strip fitter for it. 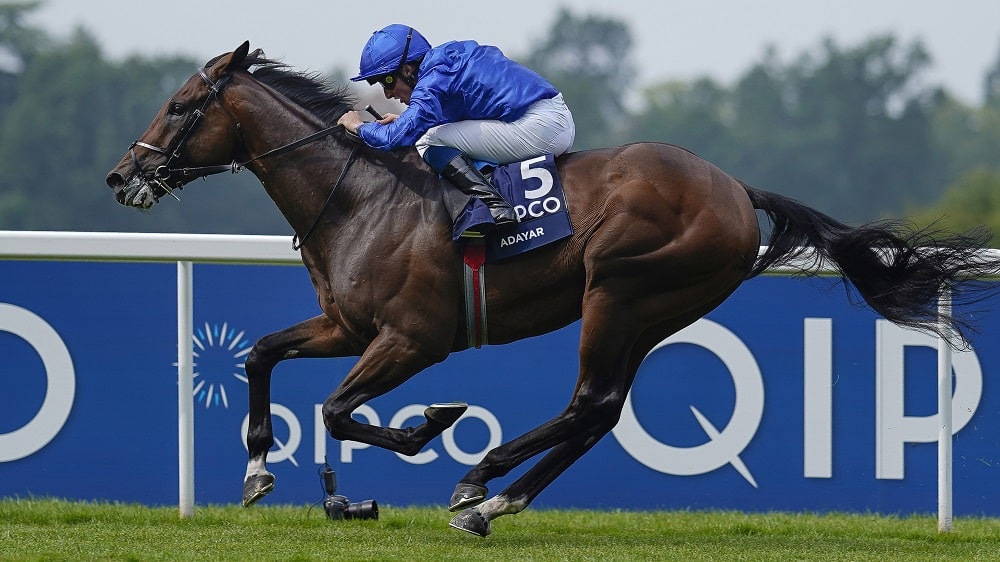 Mishriff meets Adayar off 7lb better terms from the King George and that is a concern. A combination of the revised weights and running in the Arc could be his undoing. Adayar is 2/1 with Bet365 to bounce back and defy the quick turnaround, however.

Back Adayar with Bet365

Newmarket trainer William Haggas launches a three-pronged attack on this race. At the current odds, the clear pick of his trio is the three-year-old Dubai Honour. A gelding by Pride Of Dubai, he comes to the Ascot Champion Stakes off the back of a hat-trick. Dubai Honour progressed throughout this summer and autumn, landing a Heritage Handicap at the July Festival.

He then enjoyed a breakthrough Group success in the Prix Guillaume D’Ornano at Deauville. Mishriff won the same race last year. Dubai Honour completed his hat-trick in the Prix Dollar on Arc Weekend, challenging widest of all. That Longchamp victory over a useful yardstick in Magny Cours came in ready fashion.

Stepping up to 10 furlongs looks to have been the making of Dubai Honour. He is three from three at the trip and well worth his place in the QIPCO Champion Stakes field. The question is whether this race comes too soon off the back of his trip to Paris. Boylesports go 15/2 about Dubai Honour landing the four-timer.

Back Dubai Honour with Boylesports

Last year’s winner Addeybb may not get his ground

At the time of the writing, the going for the Champion Stakes at Ascot is good to soft, soft in places. Testing conditions suit the 2020 winner Addeybb best. Another of the three in the race trained by Haggas, the seven-year-old has a globetrotting profile. Addeybb has enjoyed two profitable trips to Australia in the spring (autumn Down Under) these last couple of seasons.

After winning the Queen Elizabeth Stakes at Royal Randwick twice, it would only be fitting if the son of Pivotal could retain his crown here. However, Addeybb may not get his optimum conditions for his defence. A couple of dry days before the race could scupper his chances.

Addeybb has beaten Mishriff twice in as many meetings. Besides winning this last year, he was home a neck in front of that re-opposing rival in the Eclipse. That was a fine effort, as Addeybb gave 10lb weight for age to St Mark’s Basilica. Parimatch are 8/1 about him retaining the QIPCO Champion Stakes this year.

Bet on Addeybb with Parimatch

Big prices for the remainder

It’s 14/1 bar those four towards the head of the market with Bet365 following final declarations. Arc fifth Sealiway was only three-quarters of a length behind Adayar at Longchamp and represents the best of the French Derby form. Now trained by Cedric Rossi, this three-year-old Galiway colt has run two fine races in defeat at massive prices. British bookies show grudging respect to Sealiway.

Al Aasy is the last of Haggas trio, but hasn’t built on two facile Group 3 wins in the spring. A four-year-old Sea The Stars gelding representing Shadwell Estates, he found Pyledriver outbattled him in the Coronation Cup at Epsom. Al Aasy has since been turned over at odds-on in lower grade races, so it’s hard to fancy him.

Irish raiders Mac Swiney and Bolshoi Ballet have different problems. The former, trained by Jim Bolger, needs really soft going. Fellow three-year-old Bolshoi Ballet flopped on both his British starts, including when a well-beaten seventh behind Adayar in the Epsom Derby.

Aidan O’Brien sent his charge to the USA and won the Belmont Derby Invitational over this trip, however. Bolshoi Ballet couldn’t back it up, but 10 furlongs may be the ideal distance. At a general 33/1, it is still a leap of faith to see him having a say in the finish of the Champion Stakes here.