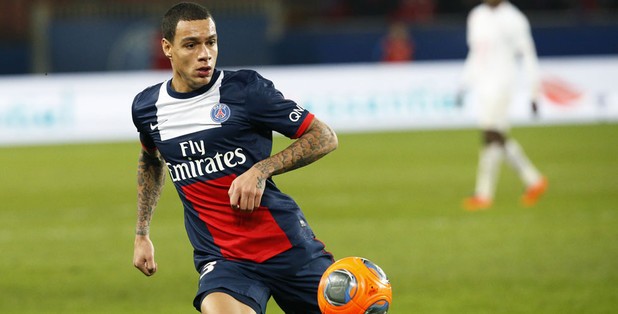 According to Le Parisien, Chelsea are looking to sign PSG right back, Gregory Van Der Wiel.

Chelsea are close to announcing the signing of Augsburg left back, Abdul Rahman Baba for 22 million pounds and will now move for another full back in Van Der Wiel.

It is believed that Ivanovic’s poor performance in the season opener against Swansea has forced Mourinho to consider a back up option.

Although it is expected that Azpilicueta will take up his natural right back position once Baba Rahman is announced, Mourinho is planning to use Ivanovic as a centre back this season.

At times last season, the Serbian looked positionally suspect at right back and despite his outstanding exploits going forward, Chelsea lacked a solid defensive presence on the right.

Van Der Wiel is an experienced international full back and will be a solid back up option for Cesar Azpilicueta. Furthermore, Ivanovic playing as a centre back will provide much necessary competition for the faltering Gary Cahill.

Chelsea are also interested in Everton defender, John Stones. Should the Toffees decide to hold onto their prized asset for another season, bringing in Van Der Wiel could allow Chelsea cope with the demands of the league and the European campaign.

Kurt Zouma and Ivanovic could very well operate as the second choice defensive partnership for Mourinho.

Although PSG are reluctant to let go of Van Der Wiel, the French champions have signed Serge Aurier permanently and could accept a sizeable offer for the Dutch full back.