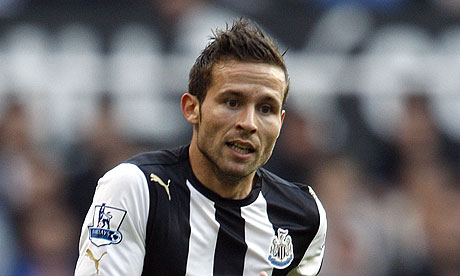 French nouveau riche Paris Saint-Germain will most likely to pull out of the race for Newcastle United’s highly rated midfielder Yohan Cabaye, which might leave the door open for Premier League giants Arsenal to lure him away.

The 27-year-old was left out of Newcastle’s opening match 4-0 defeat at Manchester City, following a £10 million bid from the Gunners. Toon manager Alan Pardew expressed his disappointment and frustration with the timing of the bid, which has left the dressing room in tatters ahead of the match.

The Independent reported that PSG could be willing to dish out £20 million for the player, to bring him back to his homeland. Newcastle officials had flown to Paris earlier to meet with Cabaye’s representatives and were also prepared to hold talks with the French Champions as well, to negotiate a move.

However French newspaper L’Equipe reports that PSG won’t be involved in the chase for Cabaye anymore and are poised to pull out of the race.

Meanwhile, Pardew has reiterated that his star midfielder won’t be allowed to move elsewhere, unless the price is met. He said as quoted in The Guardian:

“Yes maybe there is a solution whereby Yohan moves on but there is also a solution that he continues to play for us.”

The Gunners might be tempted to make another effort to lure the France international, but whether Arsene Wenger would be willing to splash anything near the asking price is yet to be seen. Further, the Gunners are trying to bring their former player Mathieu Flamini back to the Emirates on a free transfer.