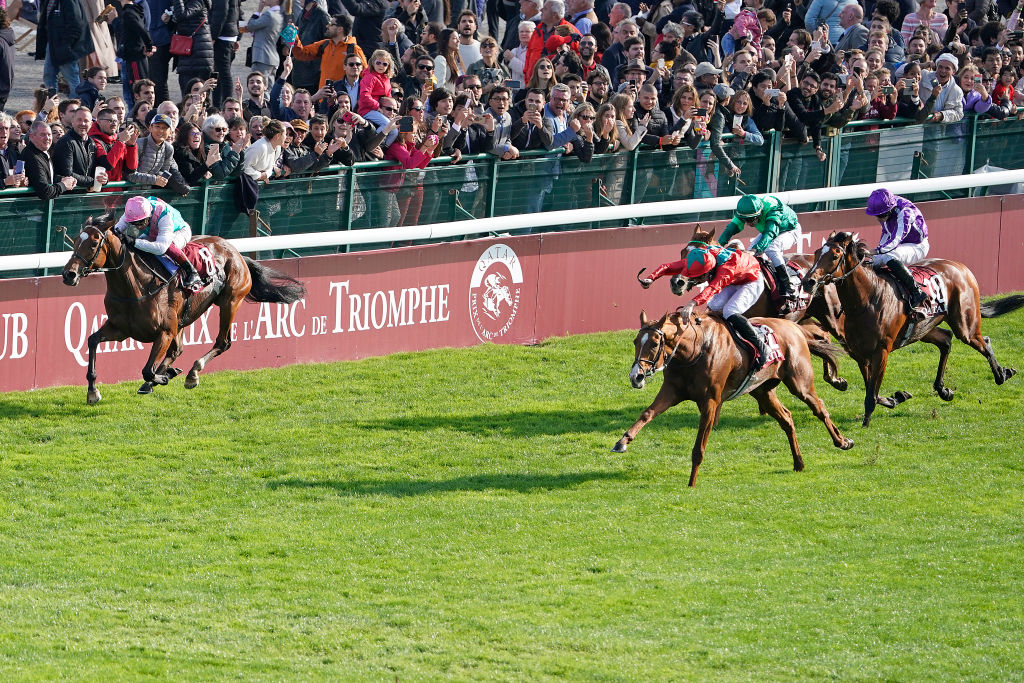 Europe’s most valuable horse race, the 1m 4f Group 1 Qatar Prix de l’Arc de Triomphe at Longchamp in Paris attracts worldwide betting interest. This Sunday (3:05 BST), the French capital becomes the centre of the sporting world and it’s not because of Lionel Messi.

This is the 100th running of the Arc de Triomphe horse race in Paris. It moved to Chantilly in 2016 and 2017 while Longchamp underwent renovation. The draw in this event can be key with the four most recent Prix de l’Arc de Triomphe winners benefitting from a low stall.

Another important aspect of the profile is a recent run. Seven of the last eight Prix de l’Arc de Triomphe results show the winner previously out on the track between three weeks and 30 days beforehand. Race fitness is also vital, then. Weight for age terms favour three-year-olds and fillies in particular, as they receive the most from their elders.

There is clearly lots for punters to think about besides the Prix de l’Arc de Triomphe odds before betting. International form lines play a part this year too with thoroughbred racehorses from the UK, Ireland, Germany and Japan joining the home team.

Why Adayar is a fancy in the Arc de Triomphe betting

Godolphin haven’t owned the winner of the Arc de Triomphe race but two leading contenders carry their silks this year. Adayar is the pick of number on retained jockey William Buick and one of two trained by Charlie Appleby in the contest. A lightly-raced colt by Frankel, this three-year-old came good on his third start of the campaign.

That was the Epsom Derby when late market support arrives for Adayar and he won the premier British Classic at 16/1. Godolphin had three runners in the race including re-opposing rival Hurricane Lane. Adayar was least fancied of those but delivered and then followed-up in the King George at Ascot. He won going away from Mishriff.

The form of those two Group 1 successes is rock solid. Epsom Derby runner-up Mojo Star, who also re-opposes, and third home Hurricane Lane, who lost shoes that day, have since been first and second in the St Leger. King George second Mishriff previously scored Sheema Classic success in the Middle East and later bolted up in the Juddmonte International.

It is easy to see why Adayar has a prominent place in the Arc de Triomphe betting as a result. The only negatives are a 71-day lay-off following a minor niggle and a relatively wide draw in stall 11. Nonetheless, Adayar is the 5/2 favourite with Betfred, who are Best Odds Guaranteed on this and all races from Longchamp after 8am on Sunday for Arc glory.

Back Adayar with Betfred

The Aga Khan silks haven’t been carried to victory in this since 2008, but game globetrotting mare Tarnawa has course experience and a good draw on her side. Now a five-year-old, Dermot Weld’s charge seeks to give her handler a first-ever Arc win. She warmed up for this with a gallant second in the Irish Champion Stakes at Leopardstown.

St Mark’s Basilica, who just prevailed by three-quarters of a length, appeared to intimidate Tarnawa and carry her out to the right that day. It was a small field and tactical race over a trip short of her optimum. Tarnawa should be marked up for that as the Irish Champion was just a stepping stone to the Arc de Triomphe race.

This daughter of Shamardal had a productive autumn campaign last year. After landing the Prix Vermeille over course and distance, Tarnawa dropped back in trip and followed-up in the Prix de l’Opera. From there, she went across the Atlantic and enjoyed Breeders’ Cup Turf glory on completely different going.

That versatility as regards ground is a big plus with the forecast rain coming this weekend. Christophe Soumillon, who rode Tarnawa in her two Longchamp wins last season, again takes the ride. Out of stall 3, she commands respect. Tarnawa is a 3/1 chance with Unibet for the Arc and a big danger to Adayar.

Bet on Tarnawa with Unibet

Godolphin’s second-string if you like here is Hurricane Lane, an impressive course and distance winner on his penultimate start. The bad luck of losing a couple of shows in-running at Epsom is now but a distant memory. Hurricane Lane is also a three-year-old by Frankel and went two places better in the Irish Derby. The stamina he showed in overhauling Lone Eagle at The Curragh bodes well here.

Hurricane Lane followed-up with a six-length rout in the Grand Prix de Paris here. On that evidence, he has nothing to fear from re-opposing trio Alenquer, Baby Rider and Bubble Gift. They were well behind Hurricane Lane in third, fifth and sixth respectively. A Group 1 hat-trick came in the St Leger, where he reversed Epsom form with Mojo Star.

This was another comfortable victory for Hurricane Lane, but no Doncaster Classic winner as ever followed-up in the Prix de l’Arc de Triomphe. That trend may end here, but the fact remains the Leger is a tough race over further less than a month beforehand. Hurricane Lane has all the attributes to buck that trend and jumps out of stall 2.

That is a better draw than Adayar for sure. James Doyle isn’t a bad substitute in the saddle either. He went close to Prix de l’Arc de Triomphe glory three years ago aboard the ill-fated Sea Of Class. Provided Doncaster hasn’t left its mark, Hurricane Lane has strong claims at 4/1 with Bet365.

Back Hurricane Lane with Bet365

Snowfall and Love looking for third Arc for O’Brien

Irish trainer Aidan O’Brien sends three over to Paris in search of a third Prix de l’Arc de Triomphe triumph. Both of his previous successes were four-year-olds, so Broome is hard to fancy, yet the market prefers three-year-old filly Snowfall. The daughter of Deep Impact impressed when winning his first four starts of the campaign.

Following victories in the Musidora Stakes at York, Epsom Oaks, Irish Oaks and Yorkshire Oaks, Snowfall had the world at her feet. She suffered a first defeat of the season over course and distance in the Prix Vermeille, however. Frankie Dettori maybe didn’t give Snowfall the best ride that day, though, and the winner Teona doesn’t re-oppose. Ryan Moore is back aboard; so, getting weight all-round, she is 5/1 with Betfred to go one better.

Back Snowfall with Betfred

Stable companion Love hasn’t hit the heights of last season, yet takes her chance in the Arc this year. Her campaign this term has largely been at 1m 2f when further may suit her best. Love gets that again her. She also meets Adayar off 5lb better terms from the King George, yet still concedes weight to him.

Love is also 1lb better off with Alenquer from the Juddmonte International. She was an unlucky loser when dropped in grade for the Blandford Stakes on Irish Champions Weekend last time out. Love went down by a short-head conceding 9lb to Le Petite Coco. Dettori, who has ridden three of the last six Prix de l’Arc de Triomphe winners, now takes over in the saddle. Love may be overpriced at 22/1 with Unibet and some each way value.

Bet on Love each way with Unibet

British champion Flat jockey elect Oisin Murphy rides Chrono Genesis in the Arc. A big talking horse, this five-year-old mare trained in Japan has four Grade 1 wins at home. She was only a neck behind Mishriff in the Sheema Classic at Meydan in the spring and has won since. Chrono Genesis is what the Prix de l’Arc de Triomphe is all about – international competition.

However, stall 14 is not ideal. She also hasn’t ever backed up a big race win. Chrono Genesis also has a 98-day break from racing. There are plenty of negatives for the grey mare, then. That is why Chrono Genesis is a top-price 10/1 with Boylesports for the Arc.

Back Chrono Genesis with Boylesports

Japan’s other runner, Deep Bond, made all in the Group 2 Prix Foy over course and distance last time out. This four-year-old colt lacks a win at the highest level, but proven Longchamp form is a big plus. Not all horses handle the false home straight where middle-distance races like this often develop.

The Arc demands plenty more than a renewal of the Prix Foy where some rivals experimented, though. Deep Bond has top weight too. Best odds of 25/1 with Bet365 here look worth considering each-way out of a handy draw.

Bet on Deep Bond with Bet365

French and German Arc runners up against it

A beaten favourite on four of her last six starts, the case for Raabihah is difficult. The outside draw in stall 15 makes things tougher still. That is probably why Boylesports go 25/1 about her chances in the Arc.

Prix du Jockey Club second Sealiway has been laid out for this and bolted up in the Prix Jean-Luc Lagardere on this card last year. A break of 119 days isn’t an advantage, however, so the French challenge in the Arc looks pretty thin. Sealiway is 33/1 with the same firm.

German raider Torquator Tasso hasn’t raced outside the domestic scene. A four-year-old colt by Adlerflug, he chased home Arc second In Swoop in the Deutsches Derby last year. Torquator Tasso has two Group 1 victories in Germany since, but this requires more. He is among the rank outsiders in the Arc de Triomphe betting as a result.