Since many may only be familiar with a couple of the sides competing in the competition, I thought I’d provide a little guide of sorts to each of the seven competitors, starting with tomorrow’s combatants.
.

The champions of each of FIFA’s individual confederations, and a representative from the host country are taking part in this year’s competition. 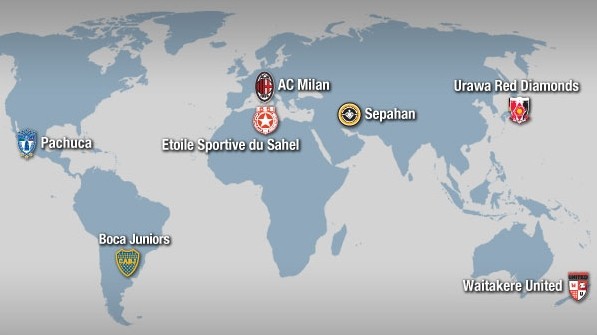 And now, to let you know a little about the clubs in the competition (even if you know some of them already), below is a club by club breakdown and background of each side
.

Sepahan won a place in this year’s edition of the Asian Champions League by winning the 2006 Hazfi Cup. They finished top of their four-team group to advance to the quarterfinals, where they defeated J-League side Kawasaki Frontale on penalties after two scoreless legs to advance to the semis.

In the semis, a 3-1 victory over Al-Wahda in the first leg would hold up, as a goalless draw in the away tie booked their place in the final. But, their dream would come up short, as Urawa claimed a 3-1 aggregate victory in the final to claim the Asian title.

However, Sepahan earned a place in the FIFA Club World Cup as consolation, as Urawa gained an automatic berth as the host country’s representative.

In the current term, Sepahan have already defended their Hazfi Cup crown to ensure their place in the AFC once again, and are currently in second in the IPL, five points back after 13 matches.

The players to watch on their side are forward Mahmoud Karimi, who has seven league goals thus far, and captain Moharram Navidkia, who played for Bundesliga side VFL Bochum from 2004-06.

Amateur side Waitakere United are the new kids on the block, having been formed only three years ago. They won the 2006/07 NZFC season title, but lost out in the playoffs to Auckland City. However, they earned a berth in the OFC when another side dropped out, and took full advantage, winning their three-team group and triumphing on away goals over Fijian side Ba FC to win the title.

Waitakere have three English players in their side, including midfielder Neil Emblen, who played for Millwall, Wolves, Crystal Palace, and Norwich City in the 90s and early in this decade, and Darren Bazeley, who played for Watford from 1989-99 and afterwards with Wolves and Walsall, along with Emblen.

After experiencing heartbreak in the 2004 and 2005 finals of the CAF Champions League, and seeing fellow Tunisian side CF Sfaxien fall in the final in the 2006 competition, Etoile du Sahel won their first continental title in the most recent edition of African’s premier club competition, denying two-time defending champions and favorites Al-Ahly with a stunning 3-1 triumph at Al-Ahly’s home ground in the second leg of their final.

Currently, Etoile are on pace to defend their CLP-1 title, as they are on top of the league standings by a point with a match in hand.

The player to keep an eye on in their squad is 19-year old forward Amine Chermiti, who scored eight goals in the CAF Champions League (second behind recent Arsenal target Tresor Mputu Mabi).

Pachuca earned a place in the 2007 CONCACAF Champions Cup by claiming their domestic league’s Clausura title in 2006.

They defeated Marquense of Guatemala 3-0 on aggregate in the quarterfinals, and, after dropping the first leg of their semifinal tie against MLS side Houston Dynamo 2-0, a 5-2 extra-time triumph sent them through to the final, where they faced fellow Mexican side Guadalajara. After drawing 2-2 and 0-0 over the two legs (the competition doesn’t use the away goals rule), Pachuca won 7-6 in a penalty shootout to claim their second Champions Cup crown.

Pachuca finished the 2007 Apertura in 9th place, which is one of the few down points of a recent spell that has seen them win five trophies in the last two years (2006 and 2007 Clausura, 2006 Copa Sudamericana, the 2007 North American SuperLiga, and the Champions Cup).

The last month has been both good and bad to Urawa. The Reds defeated Sepahan 2-0 on November 14 to win the ACL final 3-1 on aggregate and claim their first Asian Champions League crown.

Amidst all the celebrations, however, they failed to retain their domestic crown, inexplicably losing a seven-point lead in the final four matches and being overtaken for the title on the final day of the season. Still, they have an automatic berth in the quarterfinals of the 2008 ACL by virtue of their triumph this year.

Their coach Holger Osieck, who is in his second go-round at Urawa, has also managed Fenerbahce, Bundesliga side VFL Bochum, and most notably, Canada, who he guided to the 2000 Gold Cup title.

There are few clubs around the world that can claim the success and notoriety that Boca can. Their 2007 Copa Libertadores title was their sixth, and the list of world-class players that have donned their jersey in just the past three decades is amazing – they’ve been a stepping stone to Europe for the likes of Maradona, Batistuta, Verón, Kily Gonzalez, Walter Samuel, Riquelme, and more. Their most notable import to European football is current Manchester United star Carlos Tevez, who took detours through Brazil and East London before landing in Manchester this summer.

Boca booked their spot in the FIFA Club World Cup with a 5-0 aggregate victory over Gremio in the Copa Libertadores final, their fourth Copa title in this decade.

They wrapped up play in the Apertura this past weekend, and were in the title hunt until the end, when they could only manage one point from their final three matches, and finished in third, seven points behind Lanus.

If the prolific Martin Palermo has his scoring boots on, Boca will be tough to beat, but they will be without the ineligible Juan Román Riquelme, who recently made his permanent return to the club after being set free by Villareal.

AC Milan weren’t even supposed to take part in the 2006/07 Champions League, after their alleged involvement in a Serie match-fixing scandal, but after a successful appeal lightened their punishment and allowed them to be in the competition, the Rossoneri rode that break (it also doesn’t hurt to have a squad full of superstar talent) all the way to their 7th European club title. They captured the crown by defeating Liverpool 2-1 in the final, gaining a measure of redemption after losing a 3-0 lead in the 2005 final and subsequently going down in a penalty shootout to the underdog Reds.

While Milan have sealed their passage to the round of 16 in the current CL, things aren’t quite going their way in Serie A, where Carlo Ancelotti’s side lie 8th, already 16 points behind arch-rival Inter with only a third of the season gone.

This is their first appearance in the new FIFA Club World Cup, but they will be looking to add to their three Intercontinental Cup titles (1969, 1989, 1990). The ageless Paolo Maldini will be looking for winners’ medal #3, as the legendary defender was a part of the 1989 and 1990 Intercontinental Cup winning sides, but contrary to what you might be thinking right now, he was not playing in 1969 when they won their first one.

Boca and AC Milan both receive automatic berths to the semifinals.

The first quartefinal match will pit Etoile Sahel against Pachuca, and in the other, the winner of the Sepahan-Waitakere United match will face Urawa. No doubt will Sepahan hope to get their rematch with Urawa, but Waitakere will be just as determined to pull off a surprise victory. 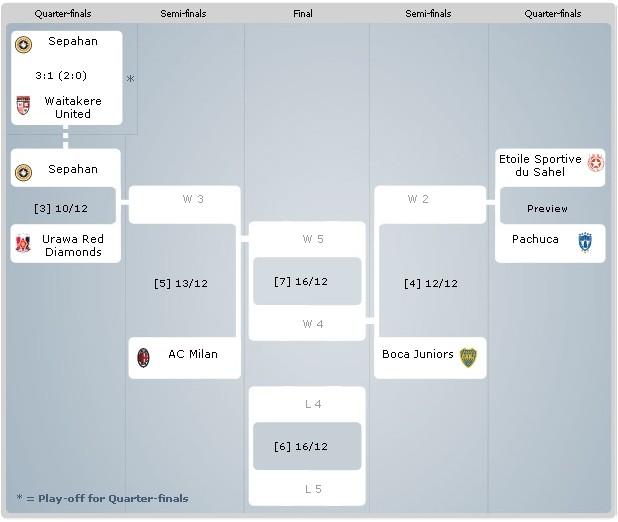 UEFA dominated in the last decade of the Intercontinental Cup, winning eight of the last ten editions of the old UEFA vs. CONMEBOL competition, but a CONMEBOL member has taken home all three editions of the FIFA Club World Cup (2000, 2005, 2006), with a different Brazilian side coming out on top each time. And with Boca getting a pretty favorable semifinal matchup, the confederation should be playing for yet another title.

But, AC Milan isn’t taking the competition lightly, with their big guns making the foray to the Far East, and Kaka and Co. will certainly put their best feet forward to take home the trophy.

If there is a dark horse, it might be the host rep, Urawa, though they could be drained after a long domestic and continental campaign, especially judging by how their domestic season ended.

In the end, the two biggest names in the competition should be battling it out in the final, and given that AC Milan have produced their best performances this season away from the San Siro, this trip to Japan might turn out to be a piece of cake.

[Editor’s note: since this article’s first draft, Sepahan FC defeated Waitakere United 3-1, and qualified for the quarter-final match vs. Urawa]