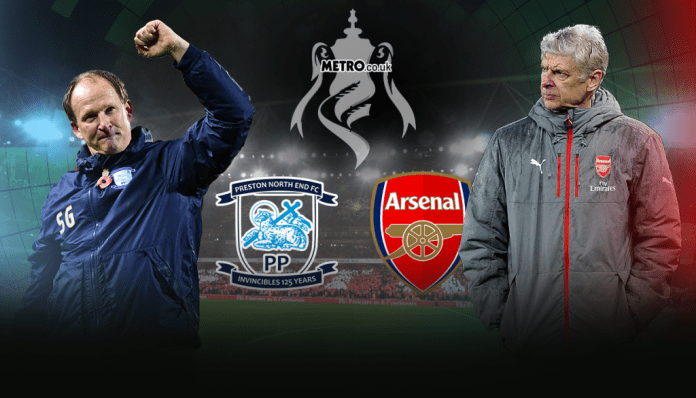 Arsenal face Preston in the FA Cup this weekend and the Gunners will be looking to get back to winning ways after their disappointing showing against Bournemouth in the Premier League.

Arsene Wenger’s men came from 3-0 down to draw 3-3 for the first time in their Premier League history on Tuesday.

Arsenal have won the FA Cup twice in the last three seasons and will be looking to win it this year as well. The Gunners are falling behind in the title race and the FA Cup could be their only chance of winning silverware this season.

Arsenal will be without several first-team players for their FA Cup third round trip to Preston. Francis Coquelin and Laurent Koscielny picked up injuries during the 3-3 draw with Bournemouth, Kieran Gibbs is an injury doubt, Debuchy, Sanogo, Akpom, Santi Cazorla and Mohamed Elneny both ruled out too.

Preston have been hard to beat this season and the home side will be looking to pull off an upset against an inconsistent Arsenal side.

The Championship outfit have lost just 4 of their last 19 matches in all competitions. However, there have been too many draws for Preston and they will need to improve at the back if they are to get a win out of this one.

Arsenal are the better side, but if Preston can dig deep and frustrate the Premier League giants, they have got every chance of a win here.

The home side will be without Jermaine Beckford, who serves the third of a four-match ban here. John Welsh and Calum Woods are also both ruled out because of injuries.

Preston have only lost four of their last 19 matches in all competitions.

Preston have drawn three of their last five at home.

The last time these two sides met, Arsenal secured a 2-1 win thanks to goals from Nwankwo Kanu and Stefan Malz.

Arsenal have done very well in the FA Cup over the last three seasons. Bet on the Gunners to win this weekend as well.

Giroud has scored in his last two outings. Bet on him to score anytime tomorrow.

Preston are simply out of their depth here. Despite their impressive defensive in front of the goal this season, they will struggle to contain Arsenal’s fluid attacking moves.

The away side are determined to get a win after their poor showing in the league and will look to punish the Championship outfit here.

An away win seems likely here.