The Premier League returns this weekend after the international break, with club rivalries and domestic objectives back on the agenda. It is a big weekend for those at the top, who will look to extend their lead, and those at the bottom, who want to escape the lower reaches of the division.

Some of the standout fixtures include Liverpool’s trip to Newcastle, Aston Villa hosting Tottenham and Gus Poyet’s first game in charge of Sunderland at Swansea. Here are my weekend Premier League predictions.

Many will see this as going one way, with the hosts in indifferent form and the Reds impressing early doors. Despite a 6-0 hammering for Newcastle the last time that the teams met, this one should be close.

Loic Remy is in inspired goalscoring form with five goals in as many matches, while Yohan Cabaye looks like he is getting back to close to his best. Alan Pardew’s side could be a difficult proposition in front of their own fans.

Despite an injury to Mesut Ozil while on international duty, the Gunners should be way too strong at home for a Norwich side that have stuttering form so far this term. The Arsenal faithful may well be treated to the return of Santi Cazorla, and the hosts should have too much firepower for Chris Hughton’s men.

The Blues will certainly enter into this one as overwhelming favourites, especially given the turmoil behind the scenes at the Welsh club. With Andre Schurrle and Juan Mata in particular impressing on international duty, Jose Mourinho has selection decisions to make – especially with the Champions League returning in midweek.

Cardiff will put up a fight, but the quality of Chelsea’s attackers should decide the game.

The Toffees have started this season well under Roberto Martinez, after a clever summer in the transfer market. Undoubtedly their most shrewd acquisition is that of Romelu Lukaku, who will look to bully the visitors’ rearguard.

Hull have held their own so far this term, and will once more be difficult to break down. I fancy Steve Bruce’s men to get a goal, but Lukaku and co should be too strong.

David Moyes can ill-afford another slip-up after West Brom won all three points at Old Trafford recently, and will field a strong side here. Wayne Rooney is in form, and if the Scottish manager can sort out his defence the hosts should claim three points.

Southampton’s progression has continued this term and the visitors have a threat in the final third. Despite this, United need to get back to winning ways at home.

Mark Hughes has seen his inherited Stoke side start to take onboard his expansive thoughts on how the game should be played, but goals have been a problem so far this season.

West Brom seem to have gotten back on track recently, with their attacking trident of Morgan Amalfitano, Stephane Sessegnon and Saido Berahino looking dangerous. That said, the sides may well cancel each other out.

All eyes will be on Gus Poyet as he leads a struggling Sunderland side out at the Liberty Stadium, and the Uruguayan will have a job on his hands to get anything in Wales. Steven Fletcher could be available, while the players will be motivated to impress their new boss, so the Black Cats could rid their luck and escape with a point.

The Hammers are on a roll after beating Tottenham 3-0 at White Hart Lane in their last outing, and in Ravel Morrison they have a player of cutting City to ribbons, especially without Vincent Kompany.

Manuel Pellegrini’s side must not get distracted by the upcoming Champions League fixtures, and need to be at their best to get three points. 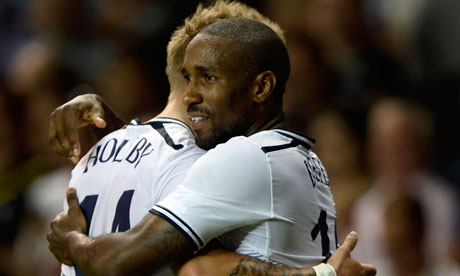 Spurs will look to bounce back after defeat to West Ham, and will have their 4-0 Capital One Cup at Villa Park from earlier in the season fresh in the memory. However, Paul Lambert’s side will put up much more of a fight here, and could be buoyed by the potential return of Christian Benteke.

Andre Villas-Boas will hope that Andros Townsend’s rich vein of form continues, but has a decision to make in attack. Villa will rely on in-form Fabian Delph and Gabriel Agbonlahor to play well if they are to get a result.

Two sides in need of points, Crystal Palace and Fulham do battle on Monday night. The hosts have found the going extremely tough in the top flight so far, and need to improve their home form if they are to stay in the top flight.

Fulham boss Martin Jol has doubters amongst his own fans, and needs to string a few results together to take pressure off. Much will depend on the Cottagers’ forwards, but a stalemate may well be in the offing here.