The best tackler in the Premier League is Liverpool’s defensive midfielder Lucas Leiva, according to new statistics from EA Sports.

Lucas has won more tackles (54) than any other player in the league (having played less matches than other players) with a success rate of 83.08% at an enviable 6.4 tackles won per 90 mins.

Manchester City’s Fernandinho is in second place (nine tackles behind Lucas) with 45 tackles won at 4.2 tackles per 90 mins.

Southampton’s Cedric Soares occupies the 10th position – 18 tackles behind Lucas – but he has a tackle winning percentage of a staggering 97.3%.

Surprisingly, Crystal Palace midfielder Yohan Cabaye also features in the list. The Frenchman is known for his creativity and influence going forward but the latest statistics show he does the dirty jobs too for his side.

Lucas struggled badly to impose himself as a top midfielder under Brendan Rodgers. His roles were severely limited in the side and there were genuine concerns over his long term future at the club. 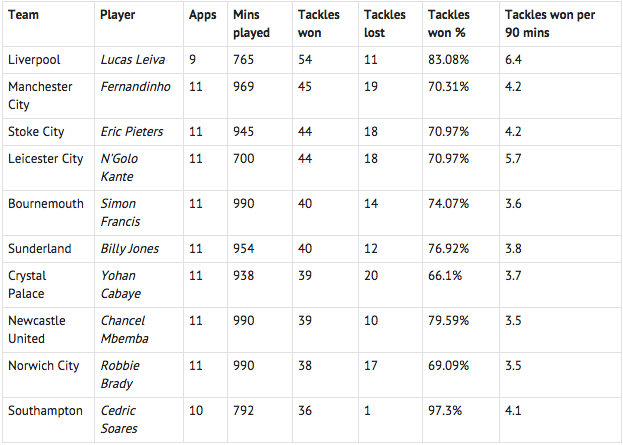 But under Klopp, he has found his old mojo back producing a series of dynamic displays at the heart of midfield. Lucas was always a smart tackler and a good reader of the game, but it is good to see him now exhibiting an energy and dynamism in Liverpool’s three man midfield.

Lucas seems to have clicked in Klopp’s philosophy of gegenpressing, and Liverpool’s midfield will only improve once skipper Jordan Henderson returns from injury.