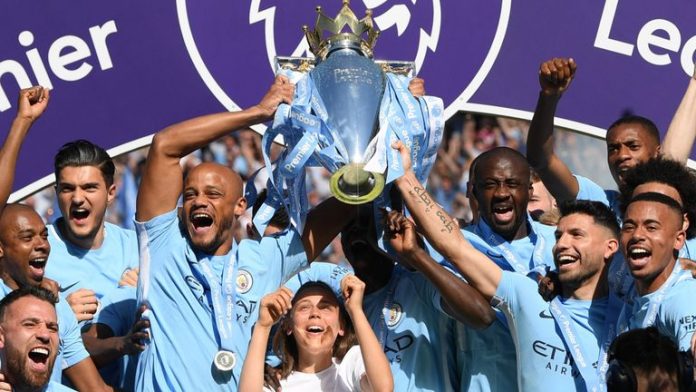 The 2018/19 Premier League season is just around the corner and the ‘Big Six’ clubs are busy getting themselves ready for the new campaign.

Manchester City are the team to beat once again, although the likes of Manchester United, Tottenham Hotspur and Liverpool will be eager to knock them off their perch.

Chelsea and Arsenal will also fancy their chances of forcing themselves into the title race, but who will come out on top?

City are 4/6 favourites with 888sport to retain the title having finished 19 points clear of United last term.

Riyad Mahrez from Leicester City has been their only major signing, but he boosts their attacking threat even further.

City missed out on signing Jorginho from Napoli, with the midfielder deciding to join Chelsea instead.

Manager Pep Guardiola would probably like to strengthen his midfield with one more addition, but City should mount a strong defence of their title.

The biggest challenge to the reigning champions is likely to come from either United or Liverpool.

Red Devils’ boss Jose Mourinho has been tetchy about the club’s transfer business this summer, but there are reasons to believe they can push their local rivals much closer this season.

Brazil midfielder Fred looks an impressive addition in midfield and if Paul Pogba can replicate the form he showed for France at the World Cup, United’s engine room will be much stronger.

Romelu Lukaku and Alexis Sanchez are a major threat up front, but United’s biggest issue heading into the new season is at centre-back.

Leicester City’s Harry Maguire and Spurs star Toby Alderweireld have been heavily linked with a move to Old Trafford this summer and if United can complete a deal for either player they will have a much stronger defensive base to work from.

Liverpool finished 25 points behind City last season, but there has been plenty of title talk amongst the club’s fanbase this summer.

The Reds have bought well, with midfielders Naby Keita and Fabinho arriving alongside goalkeeper Alisson and forward Xherdan Shaqiri.

However, manager Jurgen Klopp’s insistence that his team doesn’t need another centre-half is a risky move and could come back to haunt him as the season progresses.

Chelsea finished fifth last season, but new manager Maurizio Sarri’s record of improvement at Napoli shows that his methods can get the Blues moving in an upward direction once again.

Jorginho looks a superb addition in midfield, although Chelsea’s hopes this season hinge on whether they can complete deals for the players Sarri has targeted before the window closes.

Spurs have been quiet in the summer transfer window and that inactivity could hit them hard next season.

Mauricio Pochettino has insisted that he isn’t worried, but Spurs’ current squad isn’t strong enough to challenge for the title and they could be knocked out of the top four by Chelsea.

Arsenal went off the boil towards the end of Arsene Wenger’s time in charge of the club and new manager Unai Emery has a big rebuilding job on his hands.

The signings of Bernd Leno, Sokratis Papastathopoulos and Lucas Torreira give the Gunners a stronger looking spine, but their squad still looks short on depth.

However, Pierre-Emerick Aubameyang and Alexandre Lacazette could form a potent partnership up front and Arsenal may push Spurs hard for fifth place.