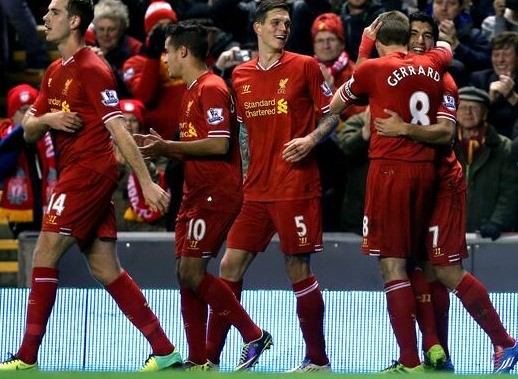 Liverpool host Cardiff City in the early afternoon kickoff on Saturday. Brendan Rodgers’ side have been in sensational form of late, having ripped rivals Tottenham to shreds last weekend, and currently lie second in the Premier League.

Luis Suarez has been the main man for Liverpool this season. His 16 goals and 10 assists has seen many fans and pundits hail him as an early shoe-in for ‘Player of the Season’, despite us only being in December.

Liverpool do not have any new injury worries, and could field an unchanged XI due to the brilliance of last week’s 5-0 win at White Hart Lane.

Defence: With Jose Enrique still sidelined through injury, Jon Flanagan should retain his role on the left. The young defender scored his first goal in the win at Tottenham, and was the subject of high praise from his manager.

Daniel Agger will be pushing for a recall after recovering from injury, but Rodgers could keep faith with the combination of Martin Skrtel and Mamadou Sakho in the heart of the defence.

Midfield: The trio of Jordan Henderson, Lucas, and Joe Allen worked a treat against Spurs, and all three should once more start against Cardiff.

The same can be said of Coutinho and Raheem Sterling, with the England man in particular a real attacking threat on the flank. Steven Gerrard remains out injured.

Attack: Who else but Luis Suarez? The Uruguayan hasn’t been perturbed by the absence of Daniel Sturridge, and will be looking to add to his already considerable goal tally on Saturday.

Prediction: 3-1 – Liverpool to continue their fine run, with more attacking brilliance to be shown from their devastating forward line.