Portugal qualified from Group B in second place but most importantly, they came through the Group of Death with Cristiano Ronaldo hitting goal-scoring form at the right time. They will face Czech Republic (Group A winners) on 21st June, and after having played against tournament favourites Germany and Netherlands, the team will feel confident about taking on any team – in the quarters or the semis.

The Portugal National Team are sponsored by Nike – and below you’ll find their home and away shirts that they have been wearing in Euro 2012. Their next game (the quarter-final against Czech Republic) is on 21st June. Portugal would be slight favourites for that game although both teams will now be expected to at least qualify for the Euro 2012 semifinals.

The Portugal home shirt is a classy red number with a green collar and green double stripes on the shoulders. It may look plain on the screen but when worn by Portugal players such as Ronaldo or Nani, it’s a truly impressive shirt. The Nike logo and Portugal crest are on the right and left on the front of the shirt.

This is the same Portugal home shirt that will also be worn for World Cup qualification after the Euros. 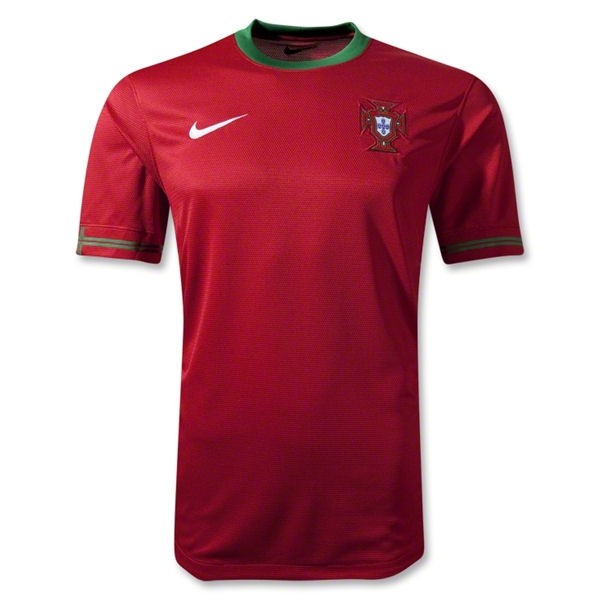 The Portugal away shirt is plain white with the customary Nike logo and Portugal crest on the right and left. The standout part of the shirt is the awesome two-coloured (red and green) double cross stripes running through the center of the shirt.

This is the same Portugal away shirt that will also be worn for World Cup qualification after the Euros.

Click here to buy the new Portugal away jersey. 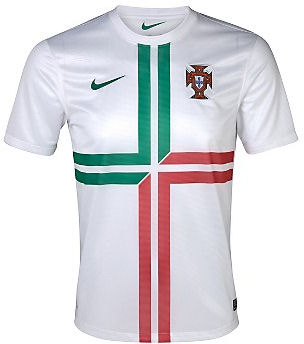