They claim Manchester United have offered €20m for his signature, but instead of paying at one go, they have proposed payments in parts – €12m up front and €8m on bonuses. For a club that thrive on player sales, such proposals were quickly rebuffed.

Rojo is primarily a left-back who can also play as a centre-back. O Jogo believe that Manchester United’s new manager Louis van Gaal is attracted by his versatility, as the Dutchman looking to add a good defender to his ranks in the summer.

The Argentine has been a reported target of Liverpool through the summer as well. However, Sevilla’s Alberto Moreno was always the first preference of Brendan Rodgers and now with the deal been sealed, the door is left ajar for Manchester United to make necessary inroads. 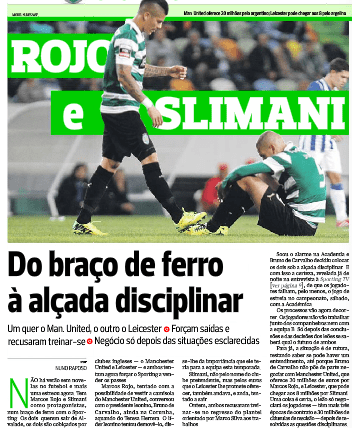 A Bola, another major Portugal newspaper reports today that Rojo and Slimani (Sporting striker) are trying to force a move out of Sporting. Rojo has remained tight lipped so far on his future but has dropped few hints recently after adding few Manchester United players on Instagram, that has fuelled wide speculation over his future.

Sporting own only 25% of the player’s economic rights. Therefore, it is imperative, they sell him at a high price, that too without any part payments coming into play. The club president is keen to take the matter with iron hands and has refused to buckle down under pressure, from both players and their agents.

A Bola claim the Sporting president is adamant that he won’t sell his key players unless the demands are met, as he won’t bow down under any external pressure. And if things turn out ugly, he is even prepared to take disciplinary actions against the rebels.