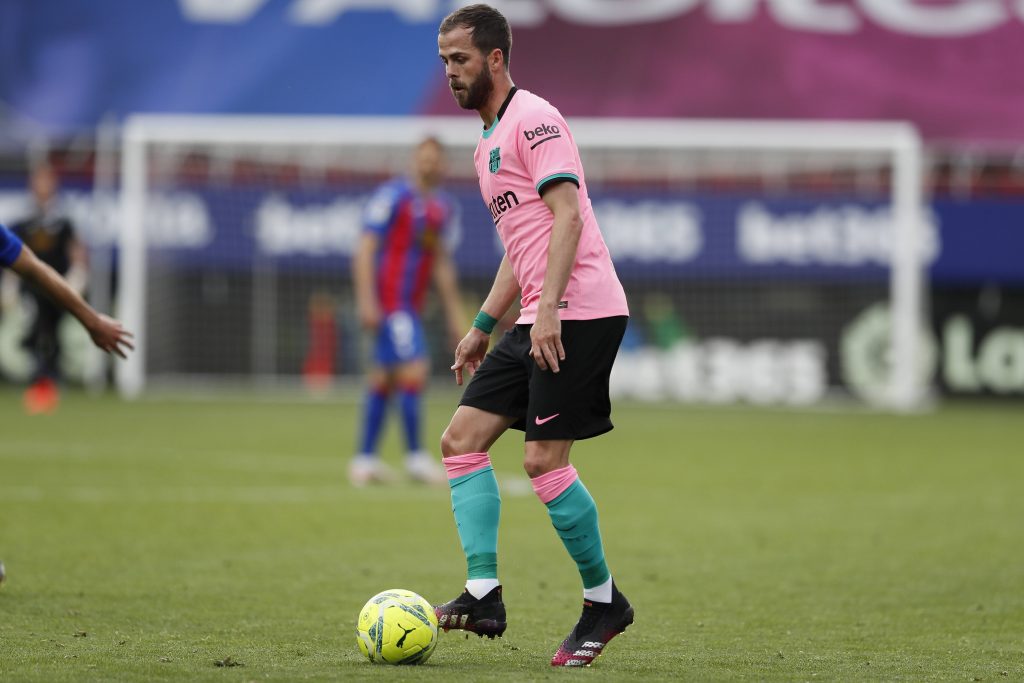 Miralem Pjanic has refused to rule out the possibility of staying at Barcelona next season while speaking to Marca, despite experiencing a disastrous first year at the club.

The Bosnia & Herzegovina international left Juventus for Camp Nou in a transfer worth €60 million last summer, with Arthur Melo heading the opposite direction as part of a coordinated swap deal.

However, neither player has managed to live up to expectations, especially Pjanic, who recorded just six La Liga starts under Ronald Koeman in 2020/21.

The 31-year-old has found himself bottom of the pecking order at the Spanish club, with Sergio Busquets, Frenkie de Jong, Pedri and Illaix Moriba all enjoying more playing time than him.

Following a lacklustre season-long stint at Barcelona, the ex-Roma playmaker could be going towards the summer exit, with a potential return to Juventus on the cards.

Pjanic’s rise to prominence in Turin coincided with Massimiliano Allegri’s trophy-laden reign. With the Italian taking over the reins from Andrea Pirlo, the Bosnian could be lured back to Serie A.

According to some recent reports (Daily Express), the Catalan heavyweights are open to the idea of offloading the midfielder this summer.

Barcelona are reportedly ready to negotiate Pjanic’s move back to the Allianz Stadium as they hope to land one between Matthijs de Ligt, Rodrigo Bentancur and Alex Sandro as part of a player-plus-cash swap.

But the prospect of the playmaker staying put beyond the summer remains a possibility, as the player remains coy on his future in Catalonia.

Pjanic told Marca: “Leave Barcelona? That is difficult to talk about that right now,”

“I am enjoying the holidays with my family, and that is all I am thinking about.

“The preparation for the new season starts in July, and then I will join up with the team. We will see what happens then.”

Barcelona thought about replacing Pjanic with Georginio Wijnaldum, but the Dutchman is now close to joining Paris Saint-Germain.

The 30-year-od refused to extend his contract at Liverpool and is on his way to sign a three-year deal at the Parc des Princes as a free agent.