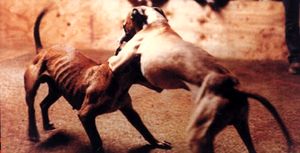 With 2 games left, 5 relegation candidates are still separated by 5 points. However, Soccerlens can safely predict that next weekend will see the relegated teams decided, and that we can probably predict them right now, too.

Their draw against Charlton (away) and a win at home against Watford has pushed them 5 points clear of Charlton and 3 clear of West Ham and Wigan. Sheffield United have a tough away game against Aston Villa which they will probably lose, but with their final game being at home against Wigan (one that you’d back them to win under normal circumstances), Sheffield stand to gain 4 points from their last 2 games. Avoiding defeat against Wigan should be enough to see them through in any case.

A bit remarkable but possible, as long as West Ham manage to overcome Bolton at home. Bolton will be reeling from Sam’s resignation plus their defence can be brittle at times and will find it hard to deal with Tevez.

There’s a good chance West Ham can win the first game (they’ve got no chance in hell in beating Manchester United in the second), and if they do so they just might escape.

It’s a tough call, but I think Wigan can beat Middlesbrough at home. Of course, if they don’t, they will be relegated as they will most likely be beaten by Sheffield on the last day and end on 35 points.

Along with West Ham and Fulham, Wigan will pretty much decide their own fate with a home game next weekend.

Cruel but very possible. Fulham are at home to Liverpool, a game that Pool play 3 days after their Champions League semi-final. An upset in that game is unlikely although Fulham can be expected to grab a draw from that game.

The away game to Middlesbrough will be key. I expect Boro to win that one, so that leaves Fulham with only 1 point from their last 2 games.

And if West Ham and Wigan win one game each, that’s 1 point too less.

Charlton blew their chances with a draw at home against Sheffield United and then killed their outside chance with a crushing defeat at the hand of Blackburn. Charlton’s next two games are Tottenham at home and Liverpool away. They’re not going to win at Anfield, and Tottenham aren’t about to lose out on a European spot. At best, Charlton can hope for a draw against Spurs, but that’s not enough.

In the comments below, please tell me who you think will survive the drop and who will get relegated. Here are the final 2 fixtures for each side:

Fulham vs Liverpool
Middlesbrough vs Fulham

Charlton vs Tottenham
Liverpool vs Charlton