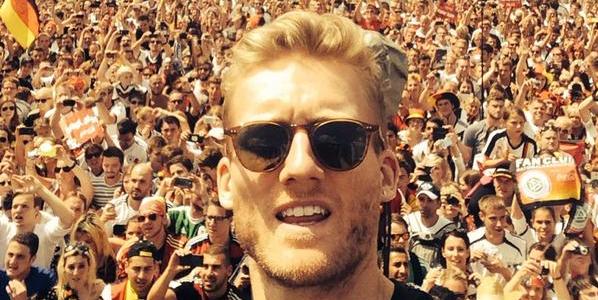 Germany has only just started celebrating their dramatic 1-0 extra-time win over Argentina in the Maracana on the weekend, with Mario Gotze’s falling volley settling matters quite convincingly in Rio, and a number of players on the bus took the opportunity to post stunning pictures of the festivities on Twitter.

Schurrle, who crossed for Gotze to fire in the winning goal, took this impressive selfie of him and what seems to be an endless sea of German fans in the streets below. The 23-year-old had a fantastic individual tournament, often bursting off the bench to make telling impacts, and was even in the running for Goal of the Tournament (his brilliant effort against stunned hosts Brazil).

What do you think of Andre Schurrle? Should he get a chance in the Chelsea starting XI?