Chelsea trio Willian, Ramires and Oscar have all traveled to Paris for Champions League quarter-final first leg against PSG. 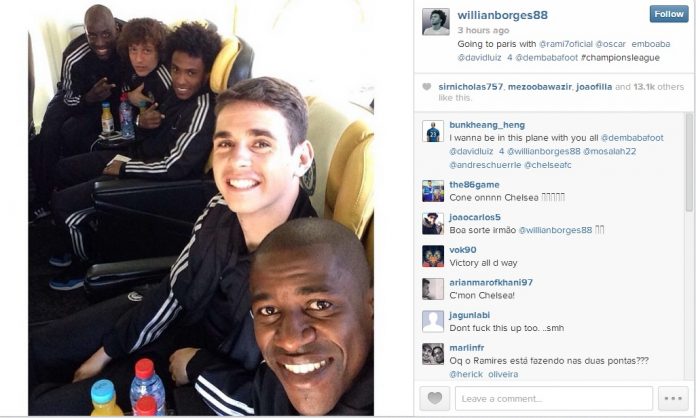 Chelsea will face French champions Paris Saint-Germain at the Parc des Princes on Wednesday night. The two sides have just met once before in Europe’s premier competition, in the group stages of the 2004-05 campaign which Chelsea won 3-0.

Nemanja Matic and Mohamed Salah are ineligible to play, having represented Benfica and Basel respectively earlier in the competition, while Fernando Torres is expected to lead the attack as Cameroon striker Samuel Eto’o stayed in England with an ongoing hamstring problem.

As for Paris Saint Germain, first choice right back Gregory van der Wiel is not available due to injury, with Christophe Jallet likely to fill in for him.

Other than that, Laurent Blanc has a fully fit squad to select from PSG had the luxury of resting a few key players on Friday night due to their big lead in Ligue 1.

Star striker Zlatan Ibrahimovic is in superb form, and has scored 10 goals in seven Champions League appearances this season. PSG are also unbeaten in 28 European home matches, and last lost in November 2006, when Hapoel Tel-Aviv won 4-2 in the UEFA Cup group stage.