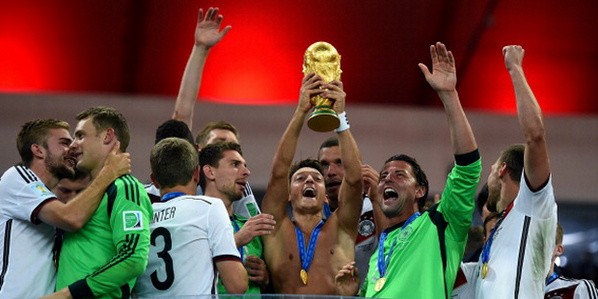 Germany won their fourth World Cup last night, with Mario Gotze’s extra-time goal securing a 1-0 win over Argentina in the Maracana. Arsenal midfielder Mesut Ozil played all but one minute of the 120 played in Rio, and the 25-year-old could not hide his delight at getting his hands on the famous trophy.

The £42.5m man has had plenty of critics since his move to the Emirates stadium, but had the faith of Germany boss Joachim Low throughout the tournament in South America. Ozil did not disappoint, scoring a crucial goal against Algeria in the second round, and setting up Sami Khedira (who could be joining him at Arsenal next season) in the 7-1 smashing of hosts Brazil in the semi-final.

Back in the dressing room after the titanic clash last night, Ozil grabbed both Kevin Grosskreutz (the Borussia Dortmund defender) and the trophy and posed for what is now the obligatory selfie, gurning with his teammate next to an amused member of the German staff:

What did you think of Ozil during the World Cup?