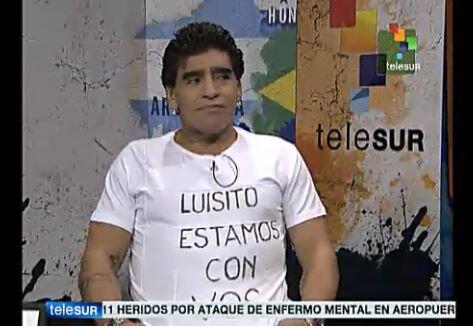 Argentina legend Diego Maradona has publicly come out and expressed his support to Uruguay and Liverpool striker Luis Suarez.

The 27-year-old was involved in an incident during Uruguay’s 1-0 victory over Italy, where he was found digging his teeth into Giorgio Chiellini’s shoulders. The referee did not penalise the former Ajax man and after an enquiry by the football governing body, FIFA, Suarez was punished.

The Uruguayan international has been slapped with a four-month ban from all forms by FIFA. However, Maradone has confirmed that he will support Suarez after he was found wearing a t-shirt which read, “Luis, we are with you.”

Maradona, who is considering as one of the greatest player to ever play the sport, is also seen as God of football. The Argentine legend’s support for Suarez has come as a shocker to many football fans.