According to Spanish publication, SPORT, Jose Mourinho has phoned Barcelona attacker Pedro in a bid to convince him in favour of a Chelsea move. 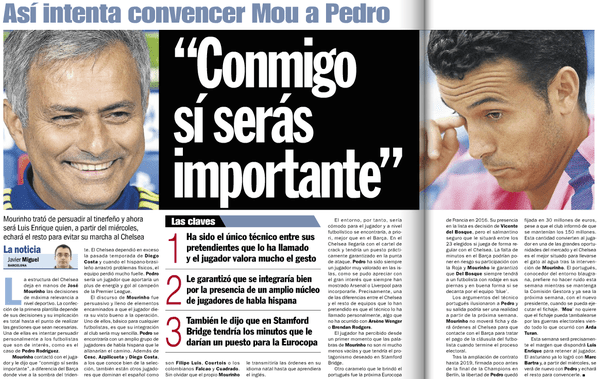 Pedro has been linked with a move away from Barcelona for the last few months and it seems he might get his wish this summer. The Spain international has been starved of game time and after the signing of Luis Suarez last summer it seems that Pedro will only ever be bit part player at Camp Nou.

The Barcelona attacker is keen to move to the Premier league and has been courted by the likes of Chelsea, Arsenal and Liverpool.

Mourinho is keen to add a right sided attacker and Pedro fits the bill perfectly.

The Portuguese manager has personally spoken to the wide forward and has given him assurances over game time. Further, the Blues manager has explained the player how he will settle in with ease due to a number of Spanish speaking players already at the club.

Pedro will add much needed creativity, work rate and goals on the right hand side for Mourinho. The likes of Cuadrado and Willian have failed to provide a goalscoring threat from the right and Mourinho is now looking at options to address that.

Chelsea were initially linked with Griezmann, but it seems that the Atleti attacker will stay put for this summer.

Chelsea have been  linked with a goalscoring right sided player since the days of Andre Villas-Boas when Hulk was closing in on a move to the Bridge.

Whether Chelsea manager to secure a deal remains to be seen, but Pedro will be a very useful signing for Mourinho and help him defend his title next season.