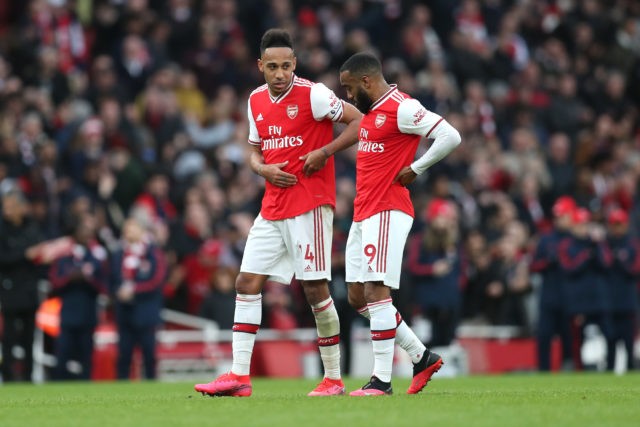 Paul Merson has told Sky Sports that Arsenal striker Pierre-Emerick Aubameyang would be a brilliant signing for Manchester United if the Reds Devils can pull off a deal for him.

The Gabonese goal-machine has a year left on his contract, and several top Premier League clubs including Manchester United and Liverpool are vying for his signature.

The 30-year-old was named the new Arsenal skipper at the end of last year, but the Gunners are struggling to convince him to sign a new deal. There is a feeling among the Arsenal camp that Aubameyang will not extend his stay at the north London club.

According to reports from The Sun, Manchester United are preparing a bid in the region of £50m as Ole Gunnar Solksjaer is looking to bolster his strike department in the summer.

Merson claims that Aubameyang could turn Manchester United into a major force, and feels that he is what the Red Devils are missing at the moment.

“Aubameyang is what Manchester United are missing. He is a goal scorer and goal scorers are priceless,” said Merson to Sky Sports.

“You couldn’t help but be impressed with their performance and if they were to sign Aubameyang and they also got someone like a Jack Grealish, are they big players? They would be a major force, in my opinion.

“They are crying out for someone who is going to score them 20 to 25 goals, and that’s what Aubameyang can bring. He gets you 25 goals without even breaking sweat. Add a Grealish if they can get him and then you’ve got Bruno Fernandes as well playing in behind a striker, Manchester United will be a major force.”

Arsenal signed Aubameyang for a fee in the region of £56m from Dortmund in the January window of 2018. Eight years ago, the-then Arsenal boss, Arsene Wenger, was forced to sell Robin van Persie to Manchester United when the Red Devils submitted a tempting offer. It remains to be seen whether United come up with a similar strategy for Aubameyang.

United could face strong competition from Premier League leaders Liverpool. According to a recent report from 90Min, Reds boss Jurgen Klopp is looking to bolster his attacking line-up and Aubameyang has emerged as a shock candidate for them.